Meant for use by the campus community, cyclists from Holland or those simply passing through, the station provides a stand, air pump and eight common bicycle tools for basic maintenance, adjustment and repair.  It’s available at no cost, 24 hours a day, seven days a week, and is located outside the Department of Campus Safety at the former 178 E. 11th St. between Columbia Avenue and the railroad tracks, east of the Kruizenga Art Museum. 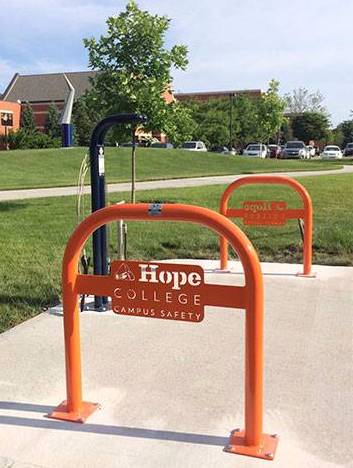 The area’s active cycling community—buoyed by the appealing cycling environment—made the decision to install the Saris-brand station earlier this month easy to make, said Jason Guthaus, the Campus Safety officer who coordinated the initiative.  On-campus demand alone is significant:  the department estimates that more than 1,000 students have bikes at Hope.

“Residents of the City of Holland share the same love of cycling as their Dutch counterparts in the Netherlands, and the students at Hope College are no exception,” Guthaus said.  “In addition to the bike-friendly city streets, the greater Holland area provides more than 150 miles of designated bike paths and off-road trails for mountain biking.”

The department’s goal in installing the station is to better serve—not only Hope, but the community in general.

“One of our roles as Hope College’s Department of Campus Safety is to provide motorists with basic assistance for vehicle problems like dead batteries and flat tires,” Guthaus said.  “Yet with such a large number of students and local community members utilizing bicycles, we came to realize that our department could do more than offer a basic tire pump at our office.  Students and staff frequently asked for tools to replace tubes and perform basic maintenance or make adjustments on their bikes, however, we simply did not have the necessary equipment.”

The tools include open-end wrenches and Allen wrenches, screwdrivers and a lever for changing tires, all tethered to the stand that allows the bike to be held off the ground.  The heavy-duty, hand-operated tire pump, designed to work in all weather conditions, stands nearby.  (Cyclists will need to supply their own patches and tubes.)  For riders that aren’t proficient in bicycle maintenance but are technologically savvy, there is a QR code available on the station to scan for repair guides and instructions.  The station is ADA-compliant.

The bicycle aid station is reachable via sidewalks through campus as well as through a parking lot that opens onto 10th Street just west of the railroad tracks between Columbia and Lincoln avenues.  The station is located between two orange bicycle docks that feature signage for Hope College and Campus Safety.

More infomation about the station, including directions for how to use the tools, is available online.