Hope College has replaced all of the lights high above the courts and concourse in the Richard and Helen DeVos Fieldhouse, a large-scale project that will have an even bigger impact on the environment and in enhancing the college’s stewardship of the resources entrusted to it.

Gone are the 540 fixtures, original to the 11-year-old building, containing some eight compact fluorescent lights (CFLs) apiece.  In their place are 330 fixtures containing LEDs, which are more energy efficient and last longer.  The LEDs also lack the highly toxic mercury contained in the CFLs. 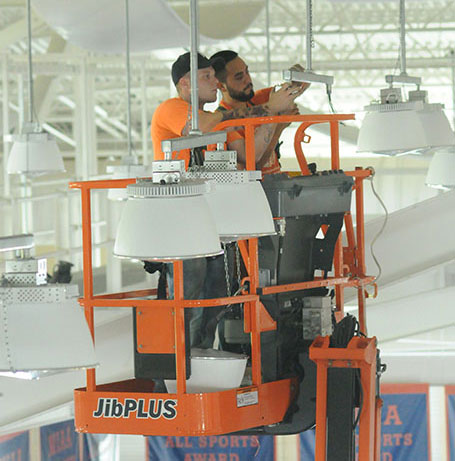 The $200,000 project will even pay for itself.  The new lights will cut the college’s power use by an estimated 80 kilowatts per month and about $24,000 yearly in electric bills.  In addition, during the decade-plus since the building opened in the fall of 2005, the college replaced on average about one third of the CFLs each year, while the LEDs are warrantied for about 10 years (100,000 hours), which should also save Hope $10,000-$30,000 per year in bulb replacement and general repair.  The return is even more immediate than that, though, since Holland’s Board of Public Works (BPW) has an energy-efficiency rebate program that earned Hope a $16,000 check for making the switch.

Along with the new lights, the college has installed a dimmer system that will be more flexible for the variety of ways that the fieldhouse serves the campus and West Michigan communities, which includes hosting not only Hope’s home contests in volleyball and men’s and women’s basketball, but events ranging from the college’s Opening Convocation, to the traditional Nykerk Cup competition, to the Holland Rescue Mission’s Great Thanksgiving Banquet, to high school graduations and summer conferences.  And even though there are fewer fixtures, the space won’t be any darker—in fact, it may even be a bit brighter when the lights are turned all the way up, according to Kara Slater and Randy Kalmink of the physical plant staff.

The lighting replacement, which was conducted by Parkway Electric and Controls Electric and completed earlier this month, isn’t the only work being done in the fieldhouse this summer.  In August, the college will be conducting a major refinishing of the court floor.

The fieldhouse is just the latest facility to gain energy-efficient LED lighting, part of the college’s on-going program of transitioning to the more eco- and wallet-friendly technology.  Other sites recently have ranged from the Rare Book Room in the Van Wylen Library, to the entry of the Haworth Inn and Conference Center, to the Knickerbocker Theatre, to Phelps Dining Hall to Gilmore Hall (which is being extensively renovated this summer).  In addition, LED lighting is original to the Jack H. Miller Center for Musical Arts, which opened for the beginning of the 2015-16 school year, and is also being installed in the new Jim and Martie Bultman Student Center scheduled to open in 2017.