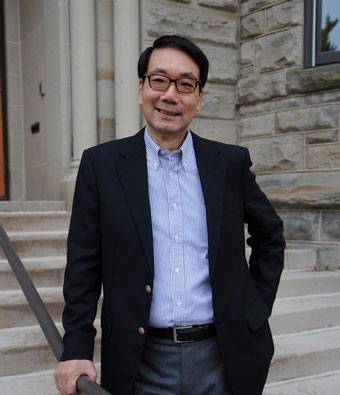 Text of the Sesquicentennial Address

Prepared remarks by Hideo Yamazaki, member of the alumni board.

I am Hideo Yamazaki. My family name YAMAZAKI sounds like a combination of Yamaha and Kawasaki, but my family has nothing to do with the motorcycle companies.

My first name should be spelled H-I- D-E- O, Hideo. I had a quite a bit of difficulty with my first name while I was in the U.S. as a student. When I was a graduate student in Mt. Pleasant, I often went to a take-out pizza place. It was one of those places where you fill out the order sheet by yourself.  You choose the size and favorite toppings, and write your name. When I was there for the first time, I realized that a person at the counter called each customer’s first name through a speaker when a pizza was ready. I followed the process with others and waited.  The person at the counter kept calling the names in a loud voice. “Bob, your pepperoni pizza is ready. “ “John, here is your double cheese and green pepper pizza.”

I felt that my turn was getting close.  The guy at the counter grabbed a microphone, but he was quiet for a few seconds. Evidently, he was struggling with my name. Then, I heard him saying, Haide-- , Hide-- , “Hideous! Your mushroom and sausage pizza is ready!"

He probably didn’t pronounce my name exactly in that way, but that’s what it sounded like to me, and I felt like I did something embarrassing.

Thanks to a Japanese baseball player Hideo Nomo who used to pitch for the Los Angeles Dodgers in 1990’s, the name Hideo seems to have gotten some recognition, and I have had much less trouble with my name since then.

This is just one out of many interesting experiences I had while I was a student in the United States.  I, of course, had more fun than problems. When I look back, the years I spent at Hope College were one of the most meaningful periods I had in my life.  This experience was both academically instructive and socially enlightening, and it became a part of myself.

My first association with Hope College goes back to 1971 when I was a senior at Meiji Gakuin University in Tokyo. I had a chance to participate in the Summer Program. I still remember the moment I arrived at Hope College. I was fascinated with the campus and its environment, and I felt I should come back here for a longer period of time.

The summer program was over and I went back to Japan. 6 months after the summer program, I graduated from Meiji Gakuin and started working for one of the firms in Tokyo, but I could not forget about Hope College. 3 years later I decided to quit the job and come back to Hope for the continuing education in the U.S. That was a rather unusual thing to do in Japan at that time, and my mother was not very happy about it.

Life at Hope was somewhat challenging for me at the beginning. Winter in Michigan was far colder than I ever expected, the food at the cafeteria was nutritious, I was told, but often wasn’t necessarily my taste, the classes required a lot of reading, and my American classmates seemed to talk too fast. I also had to be thrifty, because I only had just enough to pay the tuition, room and board. The exchange rate was nearly 300 Yen for1 US dollar, although you may not be familiar with the exchange rate. The current rate, for your reference, is about 110 yen for 1 US dollar. Despite all these difficulties, I could make it through the classes and made a lot of friends thanks to the extensive support and the care offered by the college, which I probably could not get if I had gone to a large university. In addition, Hope College and the community around it had a tradition of welcoming foreign students, which probably has started in 1871 when the first Japanese students started their education on this campus.

In December 1975, I decided to apply for a Christmas Home Stay program sponsored by one of the churches in Texas through the International Education Office on campus. All the travel arrangements were made, and I was ready to go to nice sunny Texas in December! Three days before my departure to Texas, which was the last day of the final exams for the semester, I returned to Belt Cottage, which was located on 9 th Street at that time, and I received a telegram saying, “Your Home Stay program was canceled. Please cancel your airplane ticket immediately. The details will follow later.”

I was totally lost! I immediately counted the money I had and realized that I didn’t have enough to stay at a hotel through Christmas. I wondered if the college would allow me to stay on campus through Christmas.

I decided to go to the International Education Office to see Mrs. Alma Scarlett and Dr. Paul Fried. The moment I got to the office, Alma said, “I know the situation and I was just about to contact you. Before I address this issue to the head of the organization in Texas, I will find a place for you to stay through Christmas. Take it easy and I will give you a call by tomorrow.” One hour later, Alma gave me a call and asked me that whether I was interested in staying with one of the families in Zeeland, and I immediately said, “yes” to it. The host parents, Mr. &amp; Mrs. Van Alten, treated me as a true family member, and I felt like I was home although I was practically more than 7000 miles away from home. The Christmas I spent with the host family was unforgettable, and they became my lifelong friends.

I still thank the college, particularly the International Education Office, for the extensive care of the foreign students, which I believe is a tradition that this college has continued for the last 150 years.

Being in a foreign country, I went through some unique experiences, but these experiences enriched my life to a great degree. I could interact not only with many American students but also various international students on campus. My education at Hope helped me improve my language skills, understand western cultural heritage, and establish logical and ethical thinking. All of them became important parts of myself. A naïve and introspective Japanese student with a unique first name could open his eyes to the world.

After graduating from Hope, I went to Central Michigan for an MBA, and returned to Japan in 1978. Since then, I have been involved in global business, primarily in the camera and film industry, for the last 38 years. I had a chance to travel to 24 countries. I enjoyed meeting with various business partners and the global interactions throughout my business career. I could never have enjoyed such a career without the education that I acquired here at Hope College.

I know that the students who are here today require some discipline to successfully complete the academic program at Hope College, and many of you may consider learning a foreign language or studying abroad would add further discipline.

My primary message to all the students here is that it is fun to study abroad. Once you get to the country of your destination as a student, you can learn the language in really fun ways because you will start living with it.

More importantly, you will become a globally competent person through life overseas, because you will have a chance to see America from a global perspective.

I believe a person with global competence is what America needs the most in this century. Don’t be afraid to go abroad; there is a fascinating world outside of Ottawa County.

Thank you very much!