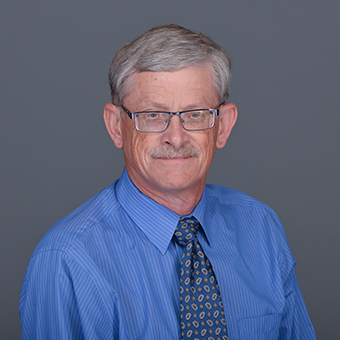 “If we knew what we were doing,” the sign on his Schaap Science Center office wall reads, “it wouldn’t be called research.”

The framed message is an ever-present reminder for the insightful and self-deprecating Dr. Chris Barney, the T. Elliot Weier Professor of Biology, of a couple of things: his desire to help the scientific world come to know new information while in community (the sign does say “we” and not “I”) and the not-so-know-it-all way it takes to get there.

Yet, Barney does get there and has for 37 years at Hope. He’s done so with numerous biology department colleagues, more than 130 research students, and over 5,800 classroom students. They all have arrived  there with Barney by their side. Because if there is one main methodology this professor and researcher uses to arrive at his lessons and conclusions, it is in the high priority and value he places on being with people, in community, and not just in the science center.

Because, you see, Barney also actually enjoys serving on campus-wide committees. Yes, he likes committee work. When have you ever heard anyone say they like being on a committee?  Why in the world?

“Well, I really like my colleagues and I like being with people from all over campus,” reasons Barney who has served on more than 50 Hope boards, committees and task forces. “They are all interesting; they have interesting things to say. I just like Hope people.

“Plus, on committees or just when with a wide range of other folks at Hope — whether they’re from physical plant, or CIT (computing and information technology), or the bookstore, or the registrar’s office — there is this sense that we’re all here for the same purpose and we’re all in this together. We all just want to make Hope better every day.”

This all lines up perfectly with longtime colleague Dr. Kathy Winnett-Murray’s spot-on assessment that “Chris is a doer and a team-builder, plain and simple.”

Perhaps this can all be traced back to his formative years growing up as one of six children with his close-knit family in rural Ohio. Perhaps it’s just who Barney is. Or perhaps it’s a little of both. Either way, nature or nurture, it’s a good biology question. And Barney has always liked those.

“I like to ask the questions to get to know more,” he begins. “Research itself can be pretty boring because you’re doing the same stuff over and over and it can be messy and dirty and smelly. But then you get the results. And my favorite part is looking at results, doing the statistical analysis, making a graph, and then looking to see what the answer to my question, to my hypothesis, is.

“It’s just so cool to know new stuff,” continues Barney whose research specialty is in heat stress-induced thirst. “And for a while, until you tell someone or publish, you’re the only person on the planet to know it. Only you and God know this. It’s sort of grandiose but it’s true. You know a secret of the universe that’s always been there but you got to discover it because God gave us certain abilities to do so. Now maybe only 10 other people care about it, but I care and God cares. And that’s really great.”

As for Barney’s love of teaching, that is a by-product of his other nature, his affable nature. The man has always had an affinity for conversation and communication.

“If I’m really, really honest, I like to teach because I like to talk,” he says. “I find physiology and biology so cool and so interesting and so amazing and so wonderful that I just like to talk about it. I tell my students in my physiology class that this will be the most interesting, most useful class you will have at Hope. And the reason why is because you can escape everything else but your body. You can go without thinking about history for a while, or without writing an English composition, but you can never escape your body. All the time you are breathing and moving and you’re hungry and you’re seeing things. It’s with you all the time. So long from now, when something happens to your body, you’ll think back and say, “Oh yeah, I remember that from Barney’s human phys class.’”

His interest in human physiology has roots in two early gifts he treasures: a human biology book given to him by his parents at age 10 and the invitation to work on the family physician’s horse farm, and then in the doctor’s office, as a teen. Exposure to both, as well as his innate curiosity, placed  him onto a path toward receiving a bachelor’s degree in biology from Wright State University and a Ph.D. in medical physiology from Indiana University. After that, he went on to work in a post-doctoral program at the University of Florida Medical School.

After three years there, it came time to look for a job teaching and researching at another medical school because that was the expectation; that is what his graduate school mentors and most of post-doc friends had done.

“But I saw Hope’s ad for a biology opening, for a physiologist, and what caught my eye is it said they were strong in undergraduate research,” Barney recalls. “I thought I could see myself doing that. I really liked teaching as a graduate student so I thought again, ‘Well, maybe this would be good.’ The plan was to come to a place like Hope for a while and then move on to a big research university.”

But then on his visit as a candidate for the position, Barney saw the Hope community in action. Literally. Besides the inevitable tours of the campus and facilities as well as running the interview gauntlet, he was also taken to a faculty basketball game at the Civic Center. “And I thought, this is so cool. This is what they are actually doing together after a bio seminar. I could see myself being a part of that.”

Barney was impressed so he in 1980 he became part of the community himself.

And he stayed, of course, deciding to skip the earlier plan of moving on to a bigger university after a while. And the main reason why? “Hope students. Hope people. Hope community,” he lists.

Winnett-Murray credits Barney again with being a main cog in the workings of that Hope community. She notes that whether as chair of the department or as the director of biology’s NSF-funded Research Experiences for Undergraduates program, whether as a faculty representative on the Board of Trustees or the faculty moderator (he admits he knows the entire faculty handbook), or whether receiving multiple external grants and writing dozens of scholarly articles,  Barney has tackled every matter with the same attention to detail and considerate treatment each deserved.

“Chris took an already strong research heritage and very much turned it into a strong summer faculty-student research program with his mentorship,” described Winnett-Murray, professor of biology. “And he saw the importance of building a strong scientific community while doing it. He’d have students in his home, letting them see and share in his family life. He’d show students, ‘Here we are as people. Here’s how we integrate our life with our work.’ That is the community he helped create. Plus, he gets good science done while helping students find their callings. Chris is the full package.”

With small figurines of Darwin, Einstein, Tesla, and Newton perched on shelves looking over his shoulder in that office that also harbors that insightful research sign, Barney’s playful nature is evident right alongside his sentimental one. His parents framed photo is there as are many of his wife, Julie, and children, Jeremy and Kara and their spouses, and granddaughter, Elena. Student and colleague pictures have their prominent places, but so does a small rendering of his favorite painting of all-time, A Sunday on La Grande Jatte by Georges Seurat. Not surprisingly, each item has its perfect, prioritized place in Barney’s well-ordered office community, too.

In retirement, he hopes to read the many books he’s purchased over the last 20 years but hasn’t had time to read. He’ll help remodel his children’s homes. He also wants to continue to catalog scholarly articles written by bio department colleagues that go back as far as 1908.

The doer still has things to do and teams to build. Those Barney qualities could never really retire.