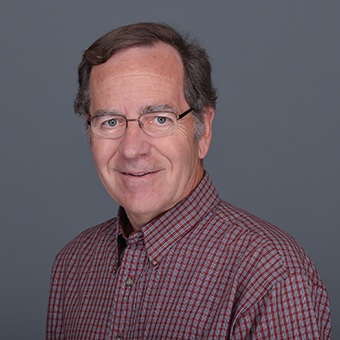 Dr. Michael Seymour: An Analytical Chemist for All Age(s)

Acid rain, an anti-epileptic drug, laboratory technology and a banana hammer. Each has one thing in common: an analytical chemist who assiduously taught and researched for 39 years at Hope College. Dr. Michael Seymour is that chemist and his work in a Schaap Science Center lab, and even away from campus, evidences a man who dedicated his life to chemical education for students of all ages. Which is where that banana hammer comes in. But we’ll get back to that in a minute.

As a curious boy growing up in cozy but cold St. Cloud, Minnesota, Seymour loved tales of ocean-adventurer Jacques Cousteau as well as science fiction. The far-off stories piqued his interest in worlds new and unknown, a psycho-precursor for how he would choose his graduate school experience to come. He took a liking — and showed a great, early aptitude — for chemistry “so I just chose it as a major in undergrad,” says Seymour who attended St. John’s University in Collegeville, Minnesota.

When time came near for the completion of his undergraduate education, his St. John’s professors strongly encouraged him to attend graduate school, “but I really didn’t know what that meant,” he reflects. As the oldest of four brothers whose parents had not graduated from college, he was urged to embark on more education than anyone in his family had experienced before. “My dad was a railway switchman and my mom worked for the telephone company,” says Seymour, “so this was all new to them, too. But of course, they were supportive.”

The University of Arizona would be his next stop, a location Seymour chose because he was accepted, of course, and because it was warm. He had never left the Midwest, and an educational adventure to the Southwest was calling. While there he researched acid rain — an ongoing environmental concern that came to the fore in the 1970s. “We didn’t solve the problem, but we developed techniques that helped us understand acid rain,” he recalls.

At Arizona to study analytical chemistry, he also met his wife, Marguerite, who was studying toxicology. As he pursued his inevitable job search at completion of his docorate, Seymour had options: work in industry or teach at a college or university. But with three job offers in his back pocket to work in different labs at consumer goods giant Procter and Gamble, Seymour declined them to explore an academic career.

“My advisor (at Arizona) said, ‘You ought to look at Hope College.’ I had never heard of Hope College,” he recounts. “He told me it was a small, Christian college in the Midwest that was strong in the sciences. I thought, well, I’m from the Midwest; Marguerite is from Chicago. It would be nice to be close to home. So I applied and interviewed, and Hope was everything it was supposed to be.”

So he came to Hope in 1978, remaining for close to four decades all the while teaching and researching. His research included five sabbatical leaves, ranging from the National Center for Atmospheric Research in Boulder, Colorado, to the Michigan State Bioeconomy Institute in Holland, Michigan.  Sabbaticals with an industrial dimension at pharmaceutical companies Pfizer and Parke-Davis and automotive supplier Gentex provided him new professional connections and teaching ideas that would help students move into that first new job after graduation. It was at Parke-Davis where Seymour developed an improved quality control test for an anti-epileptic drug that took “dozens of steps to validate,” many of which informed how he would create new examples and methods for students in the Hope laboratory program.

“I spent my whole life in academics, and much of what I teach in analytical chemistry is applied in industry,” he reasons. “So it just made sense to do sabbaticals at places where I could use what I know. And on the other hand, I also thought it would be great if I knew more about what happened in industry.”

So, what exactly do analytical chemists do? They focus on accurate and precise measurements as well as the new tools needed to measure the properties of materials and to accurately detect chemical concentrations. They also consider how to make instruments more cost-effective and efficient. “In essence, analytical chemists look at this triangle for efficiencies — cost versus time versus sensitivity.”

And analytical chemists like Seymour also prioritize the education of college-aged to middle school students. At Hope, “Mike was extremely successful in bridging our dual mission of teaching and research.  In doing so, our students were exceptionally well-prepared and successful in their future endeavors,” compliments Dr. Will Polik, the Hofma Professor of Chemistry and Associate Dean for Research and Scholarship.

“I really enjoy helping students develop skills that will last a lifetime. We’re here to help our students find their passions,” reasons Seymour, whose attention to detail and hundreds of heartfelt letters of recommendation over the years have helped Hope students find their professional place.  “No matter if they go into chemical sales, or become doctors, or dentists, or professors, or work in industry, it’s always neat to look and see where they end up.”

Seymour knows where a lot of them started, too: as wide-eyed, budding scientists like the ones he impacted as an instructor in Hope’s partnership with the Kellogg Partners in Science Program from 1989-1992, a science outreach program that had him visiting 15 regional middle schools annually to demonstrate basic scientific principles. For example, one lesson illustrated how buoyancy and gas pressure work was by constructing a Cartesian diver out of a two-liter soda-pop bottle, a plastic pipette and some wire. The most popular demonstration of all, though, came through the use of liquid nitrogen, dry ice and a banana. Those three materials allowed Seymour to show an amazed young classroom that just about anything soft could be frozen hard and used as a hammer.

“I’d see middle school teachers a few years later and they’d say, ‘I still have that demonstration you taught me how to do and I love it. And my kids love it.’  My own kids loved it, too. (He has four children, all of whom are Hope graduates: Lauren ’02, Jeffrey ’04, Joseph ’08 and David ’09.)

“After so many trips home with dry ice still in the trunk of my car after making a presentation, my son Jeff started calling me Iceman,” Seymour laughs at the memory.

Seymour’s career transitioned to more administrative responsibility when he served as the chair of the Department of Chemistry for 10 years.  He returned to working with young scientists as director of the Hope Summer Science Camp program after the untimely death of the Science Camp founder Tod Gugino ’85 in 2013.  With the support of Brenda Gugino across the next three years, the Science Camp program continued to attract more than 800 Holland area kids each summer. Now in its 20th year, the Summer Science Camp is a key part of the newly formed ExploreHope outreach program that serves an even greater range of K-12 students and teachers with activities developed and presented by Hope pre-professional students.

A geo-cacher, hiker and woodworker, Seymour will turn to those hobbies on occasion in retirement. He will also continue working part-time as the director for the MidStates Consortium for Math and Science, a group of 13 reputable Midwest colleges and universities of which Hope is a member, putting his administrative abilities to good use again. Working with the consortium will allow Seymour to retain some connection with his longtime employer and colleagues. But for the most part, after the end of Hope’s 2016-17 academic year, the Iceman will goeth.