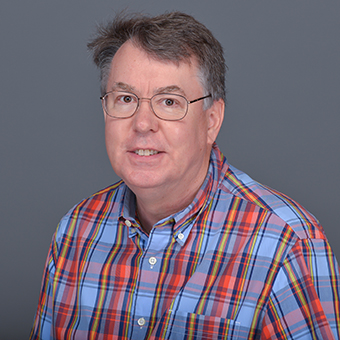 Dr. Nick Perovich: A Philosopher’s Answers to (His) Life’s Questions

For 37 years, Hope College students found a philosophical classroom both serious and light-hearted when Nick Perovich was at the helm. His wonderful and instantaneous sense of humor, combined with his thoughtful presentation of weighty material, are the hallmarks of this diligent and attentive professor of philosophy whom Dr. Jack Mulder ’00, longtime colleague and a former Perovich student, describes as “the most conscientious person I’ve ever known.”

Perovich has numerous cross-disciplinary affinities and interests, having taught in Hope’s interdisciplinary line-up of Cultural Heritage and Senior Seminar courses for a number of years as well. He is a great fan of classical music, Christian mysticism, pop culture, the history of thought, and intersections of faith and science.  “His courses always reflect his rich and wide-ranging interests that are a model of a liberally educated person,” confirms Mulder.

Now, with his retirement imminent, Perovich reflects on his love for philosophy and teaching in a question-and-answer format. Is there any better way for a philosopher — who has an affinity for life’s important inquiries — to tell his story? Here are his answers.

What was your journey like — educationally and vocationally — before coming to Hope?

I aspired to an academic career from pretty early on, though my initial interests were in Egyptology rather than philosophy.  The main place to study Egyptology in California (where I grew up) was at the University of California at Berkeley.  Because in the late 1960s Berkeley was rather unsettled, my parents wanted me to spend my first two years at the “safer” University of California at Davis and then transfer.  I had already started to develop philosophical interests in high school; when, during my freshman semester at Davis, I encountered Descartes’s Meditations at the hands of an extraordinary teacher and philosopher, Marjorie Grene, my allegiance to philosophy was set.  She pointed me toward Alan Donagan at the University of Chicago for graduate work.

I had a very happy experience in graduate school, and I had some very useful conversations with Donagan about Christianity.  I don’t think he was a Christian at the time I was his student, but we were both moving in a similar direction and became Christians at about the same time.  During my later years as a graduate student I stumbled across a book—W. T. Stace’s Mysticism and Philosophy—while browsing in the stacks at Elmhurst College, where I was doing some part-time teaching.  This made a considerable impression on me, and I developed an interest in mystical religion which has remained ever since.  The atmosphere at Hope when I first joined the faculty was very open and welcoming, and I recall thinking at the time that I had found the ideal landing spot, where I was able to teach courses in all the areas that fascinated me: the history of philosophy, issues of theory change in the philosophy of science, and, in a Senior Seminar, the various ways in which the spiritual life has been explored in the different Christian traditions.

What is it about the subject of philosophy that has fascinated you all these years? Why did you go into it? Why do you enjoy teaching it?

I love the questions that philosophy asks:  What really exists?  What can we know?  How should we act?  And I am interested in examining other thinkers’ answers to them, trying to figure out my own, and both trying to help students appreciate the efforts others have made in dealing with these questions and encouraging them to take a stab at answering the questions for themselves.

But I also love the way philosophy approaches these questions.  Philosophers engage in argument, not (usually) argument in the sense of yelling and throwing dishes, but in the sense of trying to find good reasons for believing certain things to be true and criticizing cases where the reasons seem to be either not good or nonexistent.  I can remember as a freshman in college being brought to tears by the beauty of Immanuel Kant’s intellectual vision, his explanation of what we could (and couldn’t) know, and why.   I know that when I first got married it was an adjustment for my wife (Nancy Edwards ’82 Perovich) to deal with my tendency to want to discover what case could be made for the contradictory of every statement she made, but I’ve always had a high regard for the attempt explore alternatives and to offer compelling support for your beliefs, and philosophers try to do this in regard to important and fundamental matters about which views are too often adopted unreflectively.

As the years have gone by, I have become more aware of the fact that philosophy is less self-contained than I once thought and that philosophical viewpoints are shaped by more than just rational reflection.  But I’ve never lost my appreciation of the intellectual beauty of a good (or at least intriguing) argument, and trying to share that appreciation is surely one of the things I most enjoy about teaching philosophy.

You recently took part on a GLCA New Directions grant with colleague Dr. Andrew Dell’Olio. Tell us more about that.

For some time, Andrew and I had reflected on the fact that not that long ago—in the latter part of the 19th century and the early years of the 20th century—philosophy was very different from the philosophical world he and I grew up in.  In particular, mainstream philosophy took much more of an interest in the religious life, broadly understood.  This was the era of William James and his Varieties of Religious Experience, of the Anglo-American idealists such as F. H. Bradley, an era in which spiritual concerns were front and center, in which Bradley could speak of “philosophy as a satisfaction of what may be called the mystical side of our nature.”  Even the project of a more “analytical” thinker like Ludwig Wittgenstein is to be understood in such terms.

And then it all changed, and mainstream philosophy came to understand itself as much more closely connected to science than to religion.  We decided to explore the reasons for the transformation, and to us it seemed less the outcome of philosophical critique at the hands of the likes of Bertrand Russell and G.E. Moore, and more the effect of non-philosophical cultural forces such as World War I.

Andrew and I both have an affinity for the thought of this earlier period and valued the role philosophy once played in trying to identify a religious position that was defensible in the face of the various challenges posed by the modern period.  This made us consider that, in light of the fact that these earlier thinkers had been not so much refuted as rendered passé, the thought of this earlier period and its openness to the spiritual life might deserve another look, might have a message for our own day.  Our GLCA New Directions grant enabled us to teach a course on the history of this transitional period; now we’re trying to complete a book on the same subject.

What will you look forward to doing in retirement?

Finishing the book just referred to is the most immediate task.  If there’s enough gas left in the tank, I’d like to try to produce something on mysticism and idealism as mutually supporting philosophical viewpoints.  My wife and I both like to travel, so I’m hoping there are a number of places here and abroad that we’ll be able to visit.  And I’m hoping to enjoy the cultural life closer to home:  how often we’ve had to forego the pleasure of some play, concert or exhibition at Hope because I didn’t think I could spare the time.  I hope to become more politically engaged.  And I plan to keep rooting for the Detroit Lions until they make it to the Super Bowl, and even after.