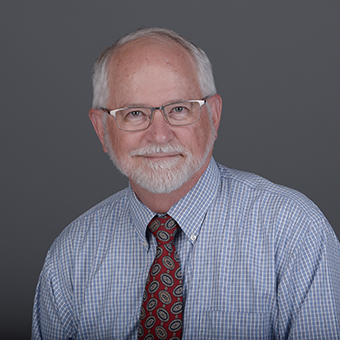 When you grow up as the youngest of 12 children, with parents who retire when you are 14 years old; when all the men in your family are expected to be pastors or professors and when the seminary you are attending implodes in controversy; when the start of your teaching career parallels the explosion in personal computing, you would no doubt look back at each milestone and memory as major influencers that tell a revelatory story of how you got to where you are today.

These are the bones that structure Dr. Tom Ludwig’s tale toward becoming an award-winning professor at a Christian liberal arts college, teaching courses in developmental psychology and aging that are imbued with technology. The flesh that moved those bones has been his hard work, faith, and intellect. As the rest of Dr. Thomas Ludwig’s life narrative reveals, he built on his circumstances and interests to create a life mission: to educate two generations of Hope students so they could better understand the world and themselves.

Born in Houston, Texas, raised in Missouri and Indiana, Ludwig focused his education on preparations to enter seminary. Since the age of 12, he knew he wanted to teach, and more specifically, to become a seminary professor of biblical languages. That track would fulfill family expectations and his own interests. “My plan all the way through high school was to go to college in a pre-sem program, then attend seminary, and then get a Ph.D. in Hebrew or Greek,” he remembers.

And, in a move that is providential in hindsight, he majored in psychology at Concordia College, thinking he’d never have the chance to take classes in that discipline again once he entered seminary.

At least, that was the plan. Unbeknownst to him, big changes were afoot in his denomination that led it to split. His seminary was the center point of that upheaval and resulted in a dramatic change to his career plans. Though he did finish seminary at a different institution, Ludwig concurrently enrolled in a Ph.D. program in psychology at Washington University in St. Louis. A new life path had begun — one that would lead him to Hope College.

“In retrospect,” says Ludwig, the John Dirk Werkman Professor of Psychology, “it was probably a little weird that I went to seminary at all, because I was never really expecting to be a congregational pastor. I thought if I wanted to be a seminary professor, I should experience the life of a seminary student. But I don’t regret going to seminary at all. It was a powerful experience that helped make me the person I am today.”

After graduating from “WashU” with a doctorate in developmental psychology and aging—areas of great interest to him due to his formative years spent in a house full of children headed by a retired couple (his own parents) — Ludwig came to Hope College by way of what he calls a kind of Goldilocks story. In 1977 he was offered jobs at a large research university and a small Christian college, but chose to come to Hope, the school that fit him “just right.”

Ludwig, who began programming computers in 1970, received an external grant in 1978 to buy a microcomputer for his research, one of the first microcomputers on campus. He did all the programming himself, and that got him quickly into the nitty-gritty of computer languages out of both necessity and interest. By 1980, Ludwig caught the vision to use computers in his teaching as well, and he wrote his first instructional program that year.

For the 40 years since, using technology in teaching as a way of striving for excellence in teaching has been a Ludwig hallmark, especially once he took on a new technological venture to supplement colleague Dr. David Myers’ Introduction to Psychology, the best-selling psychology text in the country. The award-winning PsychSim, a set of interactive computer lessons first published in 1986 and now in its sixth edition, was created by the imaginative Ludwig in order to teach students classic experiments or demonstrate psychological principles that are difficult to show on a printed page. Each about 15 minutes in length, 34 PsychSim programs can be assigned as homework to reinforce what students learn via the text and lectures. He’s also written PsychInquiry (to aid methods and interpretation of research), PsychQuest (to aid in attracting more men to the psychology field), ActivePsych (to aid instructors), and Concepts in Action (to aid shorter attention spans because the 120 interactive lessons are three to five minutes in length instead of 15).

“If people outside Hope know who I am, it’s mainly because they know about my psychology software,” Ludwig says, reluctant to divulge even the slightest adulation.

But then again, he’s got colleagues who will do that for him.

“Tom is the only living psychologist to have won both national and international awards for his instructional software. The recognized excellence and influence of his work, combined with his Hope teaching excellence, led to the American Psychological Foundation naming him, in 2005, Professor of the Year—a sort of educational Heisman Trophy given to but one psychology professor in the world each year,” boasts Myers.

“Tom is recognized around the world as a pioneer of interactive instructional software for introductory psychology,” adds Dr. Charlotte VanOyen-Witvliet, chair of the Department of Psychology. “He is also well-prepared, systematic, and clear in written and interpersonal communication of course material, expectations, and feedback. These characteristics are evident across all of his teaching.”

Students concur. Their sentiments after taking a Ludwig class most often express deep gratitude for his clarity, helpfulness, and joy.

Sitting down to speak with Ludwig, it’s easy to get drawn in by his reflective, reasoned and settled nature. He exudes a sense of sagaciousness. Yet, this man with the stately white beard and the steady, calm voice was once in a rock band, playing lead guitar, throughout high school and college. He can riff and has plans to do so more in retirement as he hopes to compose and perform more for his church and family.

Post-Hope, Ludwig is also looking forward to traveling more with his wife, Deb, perhaps to visit their faraway sons, Justin, and Michael; seeing the soon-to-be released book, Psychological Science and Christian Faith, which he is writing with Dr. Malcolm Jeeves of the University of St. Andrews in Scotland, come to fruition; and, of course, working on more projects related to interactive instruction with Worth Publishers. His high capacity for work won’t be diminished; it will just be at his chosen pace.

“I believe God’s hand has been guiding my life at each step along the way,” Ludwig muses. “Whenever one door closed, a new opportunity opened up, and the best one of all was the opportunity to teach at Hope.”