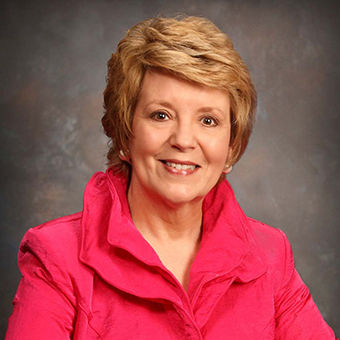 Linda LeFever Dykstra: A Song from Her Heart to Theirs

Just call her diva. That’s what most of her students call her. But she prefers a lower case “d” and in a smaller-sized font. Nothing showy, or needy, or high profile as the definition of the word usually conjures, but just diva in a good, compact way. Like this: diva.

Linda LeFever Dykstra, associate professor of music and chair of the voice division, is the diva and she has been lovingly called this musical sobriquet for years. In fact, she introduces herself this way on her syllabi.  And as it turns out, diva is the best way to describe Dykstra, who will be retiring from Hope College at the end of this academic year after 20 years teaching voice.

“She has the sparkle, passion, and intensity of an operatic leading lady,” says Dr. Julia Randel, chairperson of the Department of Music. “At the same time, she is so deeply caring about her students. She has an amazing ability to meet students where they are and nurture and challenge them to achieve more than they thought they could. She sets high standards and expresses infectious delight in each little bit of progress. She also has tremendous knowledge of the voice and how it works, physiologically and psychologically, and knows how to help each singer find her or his own truest and best sound.”

Dykstra’s earliest recollections of loving music and the people who produce it can be traced back to her growing-up days in rural Wisconsin. The family’s radio and television were often tuned to musical programming (usually polka and country and Western music), and by the age of 7, she wanted desperately to take piano lessons “but our family didn’t have a piano,” she remembers. “So my parents bought a Hammond chord-organ.” The hybrid accordion had only a two-and-a-half octave keyboard, though, and she quickly mastered that instrument. A full 88 keys were needed for Dykstra to continue. But where, how could she play piano?

Across the street and through two backyards was her church. It had a piano, of course. Dykstra trekked out everyday to practice after school in her country sanctuary until the age of 14 when her family finally acquired its own Wurlitzer spinet. “No one else was in there,” she describes. “I couldn’t use the heat in the winter and the only light I could turn on was the piano light, but I loved those afternoons with piano music filling the church.”

In high school, she would add flute and oboe to her instrumental repertoire. She was the majorette for her marching band, too. And of course, she also sang in the choir. But singing then, it was an afterthought for Dykstra. “It seemed everyone sang or played the piano in my hometown. It was nothing special,” she insists.

Dykstra would find later, though, that her singing voice was indeed something special. She received a music scholarship to attend the University of Wisconsin - Milwaukee to study oboe and become a music-education major. But when she had to give up that reedy instrument for unforeseen reasons, Dykstra turned to the other instrument she was born with, the one she had taken for granted but was literally right under her nose. She would sing and teach others how to do the same.

She finished her undergrad degree at the University of Maryland when her husband, John, who was an intelligence worker for the U.S. Department of Defense, was assigned to the Baltimore area. Eventually the couple was deployed to Germany where they lived for a total of seven years, moving back and forth between the States twice. Each deployment interrupted her graduate study in vocal education at her undergrad alma mater but as it turned out, it was in Germany where Dykstra found her latent passion to sing. There she took more classical lessons, learned German, and performed in numerous Liederabends (Song Evenings), oratorios and with the Kleines Opern Ensemble in Berlin. When she returned to the U.S. permanently in 1982, Dykstra finished her master’s degree at the University of Maryland — but in vocal performance.

Her journey to Hope started after John retired from his government job and they were free to move about the country. While she continued to teach and direct in Maryland, the Dykstras longed to move back to the Midwest. She came to Hope in 1997, working part-time at first but moving into a full-time role a few years later. The no-nonsense but soft-hearted diva quickly found her niche teaching vocal students to soar.

She reminds herself every day of many of those students in a prominent way. An entire wall in her new Jack H. Miller Center for the Musical Arts office is dedicated to her former Hope students’ professional head shots, all neatly framed and displayed. There’s Lydia Blickley, who is performing off-Broadway; there is Christoff Visscher, who is in the band on NBC’s Hollywood Game Night in Los Angeles; there’s Greg Frens, an opera singer in New York City; there’s Allison Simmons doing musical theatre in Atlanta; there’s Jenna Buck studying for her Ph.D. at Michigan State, and Sarah Ashcroft VandenBrink completing her DMA at Eastman; and, there’s Kate Goetzinger, now an aerialist. From performers, to academics, to accompanists, on Broadway, in opera companies, or at prominent grad schools, Dykstra’s impact is evident in her protégés’ many expressions of gratitude written glowingly on those pictures.

“Linda has sent many students on to top graduate programs in vocal performance and to illustrious singing careers,” explains Randel. “This has helped spread the Hope name far beyond our campus, and established a network of alumni. Just last week, we took a group of students to see Brent Smith ’12 perform with the Detroit Opera. He is a great example of the kind of work Linda has done: he started as a piano major and didn't take voice lessons until his junior year, but immediately blossomed and went on to a master's program in voice. He had never been to an opera before he came to Hope, but Linda helped set him on this path where he is now poised to have a really exciting career.”

“Each student leaves footprints on my heart,” Dykstra proclaims. “When they graduate, I tell them to keep a song in their heart, and that though I am no longer their teacher, I will always be their friend.”

Dykstra’s scholarly interest is in vocology, the science and practice of voice habilitation. Her fascination with the field started due to her grandmother, whose voice was sacrificed as the result of an emergency tracheotomy performed by a country doctor at the site of an automobile accident in the 1930s. Dykstra’s compassion toward her grandma led to her curiosity about vocal folds (“They’re really not cords,” Dykstra clarifies) and how they work and don’t work when mistreated by overuse or disease or disorder.

“After the vocal folds sustain injury, and sometimes post-surgery, I provide habilitation techniques that can release muscle tension, aid in healing, and improve capacities to use the voice correctly,” says Dykstra, whose post-graduate work in vocology has been cooperatively and collaboratively attained at the Keidar Voice Institute in New York City and the Bastian Voice Institute of Downers Grove, Illinois.

“I’ve been very blessed to have opportunities to help restore other people’s voices,” she says. “And I would not have had that without the help of Hope College. (Former Provost) Jim Boelkins was extraordinary with that. He helped me find funding and encouraged my sabbaticals. I am very, very grateful to him for that.”

Dykstra also invented SonoVu, an audio-visual technology she pioneered (and for which she has a provisional patent). SonoVu links video with an already-invented audio display software called VoceVista. Dykstra put the two mediums together in order to teach voice students both visually and aurally, since SonoVu allows them to see acoustic feedback, mouth formation and posture all at the same time. Dykstra records the two outputs through SonoVu and then hands her voice students flash drives to replay their visual and audio selves for corrective or affirmative reference.

But at the end of May, Dykstra will pack up her memorabilia-laden Jack H. Miller Center studio, taking her pictures, playbills, books, memories, and her Sono-Vu, too. With that, the diva will have left the building.