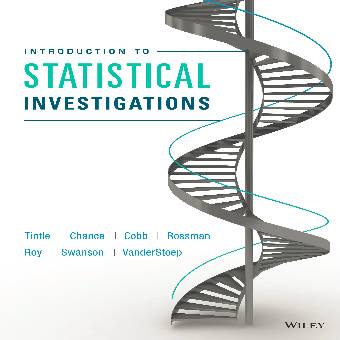 Todd Swanson and Jill VanderStoep of the Hope College mathematics faculty are among the seven co-authors of a statistics textbook that has won a national award.

“Introduction to Statistical Investigations” is receiving one of seven 2017 Most Promising New Textbook Awards from the Textbook and Academic Authors Association (TAA).  The awards recognize excellence in first-edition textbooks and learning materials based on pedagogy, content and scholarship, writing, and appearance and design.  The awards will be presented on Friday, June 9, during a luncheon at the 30th Annual Textbook and Academic Authoring Conference in Providence, Rhode Island.

“Introduction to Statistical Investigations” was published in the fall of 2015 by John Wiley and Sons of Hoboken, New Jersey.  While traditional textbooks first walk students through basic concepts and then build up to the deeper applications, “Introduction to Statistical Investigations” introduces the deeper concepts right away and then focuses on filling in students’ understanding as they apply the concepts in various contexts.  The textbook’s focus on real data taken from research studies in a variety of fields helps students understand how scientific research is done and prepares them to transfer what they are learning in the classroom into a better understanding of issues and events that affect them and others.

The approach was piloted at Hope in 2009, with additional implementation at multiple colleges, universities and high schools as the text was developed.  It was initiated at Hope in conjunction with the creation of the college’s statistical teaching and research computing laboratory through a 2008 grant from the Howard Hughes Medical Institute.

External support of the development of the book’s model, dissemination and assessment included a two-year, $181,478 award and a three-year, $550,099 award from the National Science Foundation (NSF).  In addition, an article about the approach, co-authored by Tintle, Swanson and VanderStoep with Hope colleague Dr. Vicki-Lynn Holmes and 2010 Hope graduate Brooke Quisenberry, won the “Best Paper Award” for 2011 from the Journal of Statistics Education during the 2012 annual international Joint Statistical Meetings (JSM) conference.

Established in 1987, the TAA provides professional development resources, events, and networking opportunities for textbook authors and authors of scholarly journal articles and books.  The association will be presenting a total of 23 textbook awards during the conference in June, including not only the seven Most Promising New Textbook Awards but also six William Holmes McGuffey Longevity Awards and 10 Textbook Excellence Awards.