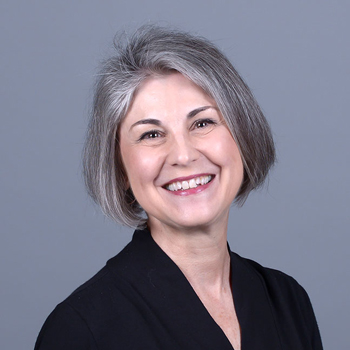 Diminutive in size but not in spirit or stature, Vicki TenHaken ’73 has been a towering presence in two distinct worlds over the course of two contrasting careers; one in corporate America and the other at academic Hope. In each place, TenHaken — collaborative, genuine, open-minded — has used her considerable wisdom and composure to affect industry and education. She’s labored at the executive level of a three-billion-dollar company and at the professorial level of a 3,000-student college. And at each locale, TenHaken’s work has borne the markings of an excellent leader and educator whose main goal has been to affect decisions and create lessons that transform and inspire.

TenHaken “blames” her liberal arts education at Hope for having a liberal arts career. For more than 25 years serving both General Electric and Herman Miller in West Michigan and for 17 years teaching at Hope, she has displayed extreme curiosity and change tolerance.  “I’d get to points in my career where I’d kind of say, ‘I got this,’ and then I’d want to go try something else, something new,” says TenHaken, who saw corporate action in human resources, planning and strategy, new business ventures and marketing.  “And I think it’s has much to do with the broad range of subjects Hope College exposed me to.”

The Wisconsin native came to Hope as student by way of transfer. She had been at public university in her home state, and during her freshman year experienced the fire-bombing (and subsequent burning to the ground) of a main building, professors walking out on-strike, incidents of racial clashes, the National Guard on campus due to Vietnam War protests, weekly bomb threats, and a 9 p.m. curfew. “By the time of (the shootings at) Kent State, the administration said, ‘Just go home. We don’t want you on campus anymore. Whatever your mid-term grades are, that is your final grade. Just leave.’”

Leave she and 10,000 other students did, but she had no intention of going back to that school or to any other college for that matter. “I told my dad, ‘Maybe college isn’t for me.’ And he said, ‘No, you’re going to college. Where do you want to go instead?’  I told him, ‘Well, maybe Hope.’ And he said, ‘Okay, get in the car. We’re going over there.’”

As a communication major at Hope, she wasn’t sure what she wanted to do in the business world after graduation. She returned home to Wisconsin looking for work, finding some as a bank teller. But four months later, after a ringing and personal endorsement by Hope professors who knew her capabilities, TenHaken landed a job as a communication specialist at GE, once a large employer in Holland. At a time when many women, even with college degrees, still had to start out in administrative support roles (ie, the secretarial pool), TenHaken had a seat at the decision-makers’ table.  “The fact that I was able to start out in a professional position, in a management training program, made all the difference in my career,” remembers TenHaken. “I owe that to my Hope professors.”

Moving on to Herman Miller after five years at GE was TenHaken’s next step up the corporate ladder. She was often the only woman in business meetings but she never backed down. Achievement was her gift, and she knew it, as did the men who worked alongside her. She took on projects that scared her (just a little) at the outset but, upon completion, were organizationally and personally transformative. She credits several male mentors with coming alongside her during time at GE and Herman Miller.

“When I was in my 20s, I probably looked like was 16. I thought people were not going to take me seriously not just because I was woman, but because I looked so young,” she laughs.

“But, I’ll never forget the first union negotiation meeting I ever went into at GE where the people sitting across the table from me were the quintessential union leaders,” TenHaken explains.  “Here were these big, chain-smoking guys who saw this corporate newbie and seemingly glared. But they chose to teach me and say, ‘Okay, we’ll help you learn how this is done.’ So instead of intimidating me or trying to run over me, which they easily could have done, they took me under their wing.”

And in return, she has taken hundreds of Hope students under her wing for close to two decades, too. After TenHaken had served on Hope’s Economic and Business Advisory Board from 1988 to 1995 as well as the Board of Trustees from 1996 to 2000, former department chair Dr. James Heisler encouraged her to apply to teach in the college’s Department of Economics and Business. She had already been thinking about making a move toward academia anyway; her liberal-artsy brain was kicking in again. She left her high-level position as executive vice president of strategy and chief of staff at Herman Miller, waving the corporate world an appreciative and necessary goodbye. And she transferred to Hope once more.

“I had to change things up,” reasons TenHaken who holds a master of business administration degree from Grand Valley State University. “It was a time when I wanted to do and learn something different. I’m grateful to Hope for giving me a faculty position when I did not have a traditional academic background.”

TenHaken focused on management in her teaching, and corporate longevity and leadership development in her writing. She wrote two books, The Everyday Leader: A Handbook for New Managers and Lessons from Century Club Companies: Lessons for Long-Term Success, as well as dozens of journal articles on those topics.  “I was a little intimidated at first by the thought of writing, but I have loved my scholarly work. I appreciate so much how my Hope colleagues helped me get started and how Meiji Gakuin University’s Makoto Kanda involved me in his research on corporate longevity (in Japan).”

Of course, she has loved her teaching and advising too. As the Ruch Director of the Baker Scholars program, TenHaken expanded the student experience beyond West Michigan and U.S. borders by introducing a global perspective to the group. She also gave Baker students freedom, allowing them to see lessons from success as well as failure.

“Vicki had a major impact on the Baker Scholars Program,” informs Dr. John Lunn, the Robert W. Haack Professor of Economics. “She had great experience herself in business, which added to her impact on the students and their visits with key business figures.  She also let the Bakers be a student-run organization, allowing them to make mistakes and learn from them.  Plus, it was during her time as a faculty advisor that the Bakers had excellent international trips to Panama, China (twice) and India.”

“Vicki's legacy and impact will be her leadership and role modeling,”adds Dr. Brian Porter, professor of management.  “Our students and our department are better today because of Vicki's presence.”

A recent cancer survivor, TenHaken admits that the disease hastened her decision to retire. “Otherwise, I would have worked few more years,” she declares. But now she’ll have the chance to travel more with her husband, John Meshkin. She’ll get to check in on her daughter, Alison Meshkin ‘10 Sale, granddaughter, Audrey, and son, Nick Meshkin, as well visit her octogenarian parents, Vic and Ruth TenHaken, in Florida, more frequently.

And TenHaken will keep current her growing list of 100-year-old American companies, tweeting or blogging about them as much as possible, sending off missives that declare what she taught and what she lived. Her business-savvy messages are always clear and profound. In the one below, she unknowingly gives a glimpse into a summary of her own story though only meaning to help others think about theirs.

“Since business is such an influential part of modern society,” TenHaken declares, “it has important responsibilities. Business can do well while doing good. In the end, it’s about relationships. With the people you work with, with your customers, your suppliers, your community. If we get too focused on efficiency and productivity and profitability and lose sight of those relationships, we’re not going to be very satisfied at the end of the day. Yes, we have to be a good businessperson. Nobody benefits if the company doesn’t succeed, but how we succeed makes all the difference.”