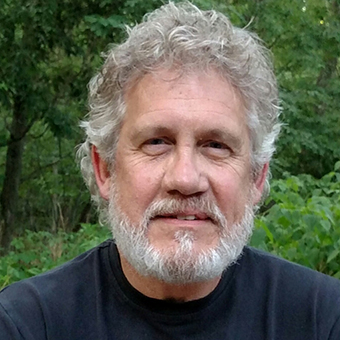 David James of the Hope College faculty, writing as D.R. James, explores the bittersweet experience of life viewed from middle age in “If god were gentle,” his second full-length poetry collection.

“There is, in D.R. James’s elegiac collection, ‘If god were gentle,’ a surfeit of intelligence and sentiment even as he engages the most ordinary stations of our living,” reviewed author Kwame Dawes, editor of the journal Prairie Schooner.  “The familiar — parenting, loving, dying — is re-visioned with distinct poetic beauty that is preserved in the ‘salt and ice’ of disciplined craft and gentle irony.”

Published by Dos Madres Press, the volume includes new works as well as selections from his five chapbooks published between 2006 and 2017 and a variety of poetry journals.

James’s prior poetry publications include the full-length collection “Since Everything Is All I’ve Got” (2011) and the chapbooks “Split Level” (2017), “Why War” (2014), “Psychological Clock” (2007), “Lost Enough” (2007) and “A Little Instability without Birds” (2006).  He has had poetry and prose in numerous publications, such as Caring Magazine, Coe Review, Diner, Dunes Review, Friends of William Stafford Newsletter, Galway Review (Ireland), HEArt Online, Hotel Amerika, North Dakota Quarterly, Passager, Rattle, The Sow’s Ear Poetry Review, Sycamore Review and Writer’s Digest, as well as in the anthologies “Poetry in Michigan/Michigan in Poetry” (2013) and “A Ritual to Read Together: Poems in Conversation with William Stafford” (2013).  James goes by D.R. rather than David to distinguish his work from that of another poet, David James, who writes from the east side of the state.

Copies of “if god were gentle” are available for $17 through the college’s Hope-Geneva Bookstore, which is located on the ground level of the DeWitt Center, 141 E. 12th St., and can be called at 800-946-4673 or (616) 395-7833.  Additional ordering information may be obtained by e-mailing the Hope-Geneva Bookstore at bookstore@hope.edu. The book is also available through the publisher or Amazon.