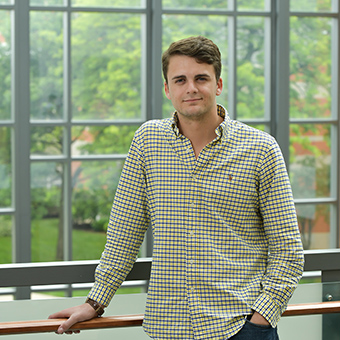 Hope College senior Brandon Derstine, who grew up in Midland and now lives in Beaverton, has received a highly selective DAAD Undergraduate Scholarship from the German Academic Exchange Service to study and conduct research in Freiburg, Germany.

Only approximately 30 of the scholarships are awarded annually to students from across the United States and Canada for four-10 months of study in Germany during their third or fourth year in college.  The value of the award is approximately $6,000, and includes a travel allowance.

Derstine, a 2015 graduate of Herbert Henry Dow High School who is majoring in both chemistry and German, will be conducting chemistry research at Albert-Ludwigs-Universität Freiburg and attending IES Abroad’s Freiburg – Language and Area Studies program.  He will work full time in the laboratory of Professor Dr. Ingo Krossing from the latter part of July through the end of the summer, and then part time during the fall semester while attending the IES Abroad courses, which are taught in German.

Derstine has conducted collaborative research at Hope since the fall of 2015 with Dr. Jason G. Gillmore, professor of chemistry.  In 2017 Derstine was named a Beckman Scholar by the college, receiving support to conduct research full time during the summers of 2017 and 2018 and part time during the intervening school year through a Beckman Scholars Program award to Hope from the Arnold and Mabel Beckman Foundation.  He also received awards through the Michigan Space Grant Consortium undergraduate fellow program in both 2016 and 2017.

Founded in 1919, the German Academic Exchange Service (the English translation of Deutscher Akademischer Austauschdienst, or DAAD) is a registered members association comprised of German institutions of higher education and student bodies.  The DAAD has awarded funding to more than 1.9 million scholars in Germany and abroad since the service was established in 1919.  More broadly, the DAAD supports the internationalization of German universities, promotes German studies and the German language abroad, provides developing countries with best practices in establishing universities, and advises decision makers in the area of cultural, educational and developmental policy.