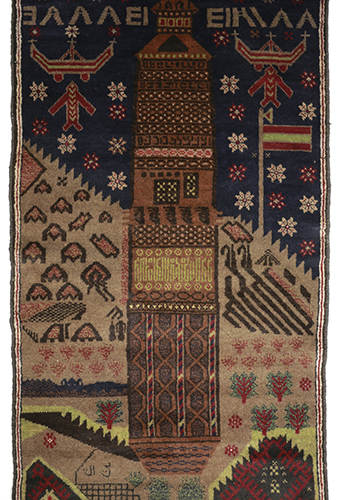 Exhibition to Feature Textiles and Culture of Baluchistan’s Nomads

An exhibition opening at the Hope College Kruizenga Art Museum on Tuesday, Jan. 15, will showcase a variety of textiles made and used by the nomadic peoples of Baluchistan, a territory that straddles the modern borders of Iran, Afghanistan and Pakistan.

“Once Were Nomads: Textiles and Culture in Baluchistan” uses textiles to examine the traditional life and culture of the peoples that make their home in the Baluchistan region. Baluchistan literally means “land of the Baluch,” but the region is home to many peoples and ethnic groups including Pashtun, Aimaq and Hazara, among others. The exhibition will feature 45 examples of textiles including rugs, clothing, animal trappings and other such items, ranging in date from the mid-19th to the late-20th centuries.

In addition to the typical types of museum displays, the exhibition seeks to provide visitors with a glimpse into how the textiles are used in daily life.  The exhibit will include a reproduction of a traditional tent, with furnishings, and a camel sculpture will model customary animal trappings.  Most of the textiles on display were woven from the hair or wool of goats and sheep raised by the nomads.  Other textiles, such as clothing, were often made from cotton or other materials purchased by the nomads using money earned from the sale of surplus wool, leather and milk from their flocks.

Historically leading pastoral lives, many of the peoples in the Baluchistan region regularly move their flocks across the land in search of fresh pasture.  To make this periodic migration easier, the nomadic peoples of the region came to heavily rely on the use of a variety of textiles. “The centrality of textiles in the lives of the nomadic and semi-nomadic peoples of Baluchistan makes these textiles an excellent lens through which to view and understand their culture,” said Charles Mason, who is the director and the Margaret Feldmann Kruizenga Curator of the Kruizenga Art Museum.

The exhibit also captures the lifestyle of a culture that may be fast disappearing.  “In recent decades, this nomadic way of life has become increasingly difficult to maintain as changing political and economic conditions have limited the free movement of people within countries and across international borders,” Mason noted. “Nomads still exist in Baluchistan, but their numbers are dwindling and their culture is changing so rapidly that this ancient way of life may vanish from the region by the end of the 21st century.”

The content and presentation of the exhibition was organized in collaboration with Hope junior Caleigh White, whose curatorial work on the exhibition was supported by the college’s Borgeson Scholar Program and John H. Dryfhout ’64 Internship endowment. Most of the textiles featured in the exhibition were donated and loaned by Verne Trinoskey and Paula Armintrout Trinoskey of Eureka, California, who also provided historical information and technical analysis of the weaving.

The exhibition will continue through Saturday, May 11. Public visiting hours are Tuesdays through Saturdays from 10 a.m. to 4 p.m.  Please check the museum’s website or social media for additional information about special programs and events related to “Once Were Nomads.”