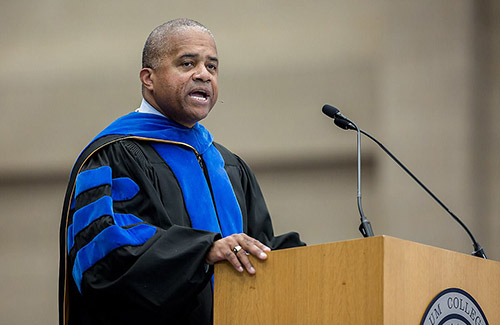 As Hope College began its 157th academic year with its Opening Convocation on Sunday, Aug. 26, featured speaker Dr. Fred L. Johnson III encouraged the members of the incoming Class of 2022 to be confident that their years at the college would prepare them not only for careers but to better meet the needs of their communities, nations and world.

“[T]his Hope College education isn’t just a good tool to have in your box of knowledge.  It’s a treasure that can help you join others in solving some of our most pressing problems,” said Johnson, an associate professor of history, as he presented the address “More than ever…  just believe!” on Sunday, Aug. 26, in the Richard and Helen DeVos Fieldhouse.

At the same time, Johnson acknowledged that the students are living in an era when many in society question whether or not a liberal arts education remains relevant, particularly one that like at Hope is grounded in the Christian faith.

“Sounds quaint, doesn’t it?  Sounds old fashioned, to speak of people having a purpose beyond serving self.  It even sounds kind of ridiculous, doesn’t it? Talking about doing work that elevates human beings and guides people into fulfilling the second-greatest commandment: ‘Love your neighbor as yourself,’” he said.

In response to such doubts, Johnson through a series of questions considered several situations in which a significant difference might be made by values and character shaped by a mature faith, and by perspective informed by an understanding of the world and the past.

“Does faith really matter when you go on the job, into the courthouse, into the operating room, into the sports arena, to your recreation space or even to war?  How does understanding the human condition and those forces that can either uplift or torture the human heart really matter to the bottom line?  Why pay attention to the thoughts, ideas, movements and events that have sometimes been invaluable gifts to humanity while others have inspired unspeakable acts of evil?” he said.

That the students chose the college in the first place, Johnson said, suggests that they already value the difference as they prepare for a world “that’s already looking radically different four years from now than it does today.”

“[B]ecause you’re here, some part of you already understands, believes or at least suspects that the Hope College education you desire will not only equip you to compete in the unforgiving marketplace of the 21st Century, but guide you into a deeper understanding of yourself, your faith and your purpose,” he said.

“I’m talking about the assurance in your deepest heart of hearts where you already know that there’s more to this journey than a law-of-the-jungle rule that celebrates every woman and man for her- or himself,” he said.  “You already sense that you want to do more than have a good time without giving thought and assurance to those daily being stomped by the heavy boot of life.  You possess a burn to do, to be, to contribute and discover the possibilities above and beyond settling for a predictable life of comfort, privilege and security.”

Looking ahead to their Hope experiences to come, Johnson challenged the students to stay committed to the vision.

“So more than ever, we ask you to just believe and join us in taking those next steps that’ll turn you into dynamic professionals, movers and shakers whose belief will give life as you change lives in the name of Jesus, the Christ,” Johnson said.

The convocation marks the formal start of the college’s academic year.  The new students had moved to campus on Friday, with returning students arriving on Sunday.  Classes begin on Tuesday, Aug. 28.