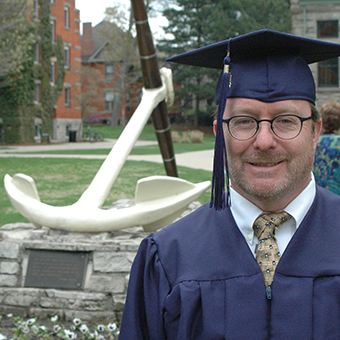 “I’ll Always Be a Student Forever”

Sherman LaBarge started his Hope College education back in 2009, with an English grammar class taught by Dr. Rhoda Burton. It was hard but it went well, so the next semester he followed it up with a writing class, then later a literature class, then onto a religion class.

Now, after nine years of taking one class per semester, LaBarge, a employee in the college’s physical plant department, is graduating from Hope in June with a bachelor’s degree in English with a creative writing emphasis. The 50 year-old husband and father of two teenagers participated in commencement ceremonies a couple weeks ago at Smith Stadium, celebrating his achievement to the delight of his family and friends. And himself.

Ever since the third grade, the beauty of the written word in story form has enthralled LaBarge. He’s still taken by good writing. When you see him working the west and south sides of campus, ear buds in place while going about his custodial work, he’s listening to audiobook classics by Agatha Christie, Joseph Conrad and Ernest Hemingway, or new works like Theft by Finding by David Sedaris or Lincoln in the Bardo by George Saunders.

But in 1986, when he started his college education at the University of Maine, his home state, LaBarge chose engineering classes. “I picked out a major from a Parade magazine article that ranked highest paying jobs,” he admits. “Engineers were making seventy to eighty thousand dollars a year back in the 80s. And I thought, hey, that's one for me. And so I went to U of Maine. When my math classes didn't go well, they encouraged me to take a semester off to think about it.”

A semester off turned into a few years’ break from a earning a college degree. He decided to move to California and then lived in Colorado for 20 years, working as carpenter and property manager and eventually earning his associate of arts degree from Colorado Summit College in Breckenridge.

When he and his young family moved to Holland in 2008 to be closer to extended family, and after working at Hope for one year, LaBarge started his bachelor’s degree.  He dedicated at least 15 hours a week on his classwork, wedging it in between his fulltime job and family commitments, all the while scaling back on his passion for remodeling projects in order to accomplish only the essential chores around the house. Through it all, he earned a 3.42 GPA.

In Hope classrooms, LaBarge was always older than his fellow students and even some of his professors.  “I found myself trying to blend in amongst my student-peers, forcing myself from sharing pictures of my kids,” the good-humored LaBarge. “I embodied the "Hello fellow kids" meme, the one taken from Steve Buschemi's Saturday Night Live episode. That was successful up until our group projects tried meeting at 9 p.m. Too late for me.”

Profoundly grateful for the opportunity and support from his Hope bosses, LaBarge’s future plans are to remain at Hope and keep writing, reading and learning. Those are the exact reasons he decided to earn a Hope degree in the first place.

“I've always wanted to better myself. I'm just a lifelong learner really,” he concludes. “I'm educating myself constantly. Whether I’m on YouTube looking for how to caulk a tub better or fix my car or learn landscaping tricks or reading a new novel, I will always be a student forever. “