Organizations seeking LEED certification for their construction projects have many ways to earn it, including by using regional materials. In developing the Jim and Martie Bultman Student Center, which recently received LEED Gold certification, Hope College integrated a meaningful resource from mere yards away: wood saved from venerable campus elms that were felled by a storm.

The trees were lost in a thunderstorm that caused damage throughout the Holland area in June 2011.  Hope saved the trunks and turned them into boards to be used some day in a way that commemorated the trees’ long tenure at the college. 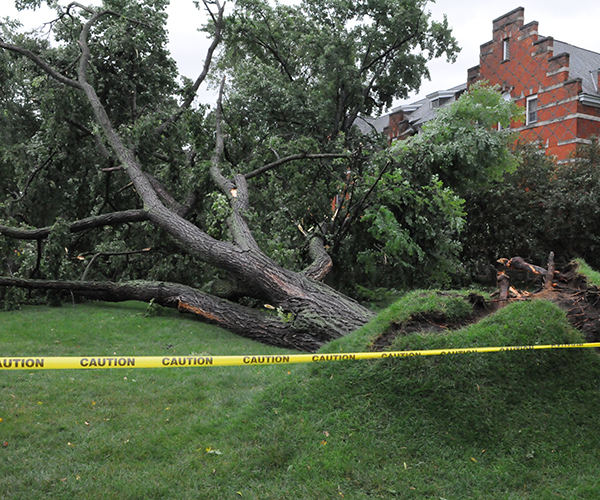 The student center, which is in the central campus, provided the opportunity, with construction beginning in 2015 for a fall 2017 opening.  Boards from an elm estimated to have been 164 years old (older than Hope, chartered in 1866) panel the east wall of the building’s chapel.  A wall in a large, multi-use room and the wall and bench work surrounding the main lounge’s fireplace also feature wood from campus. 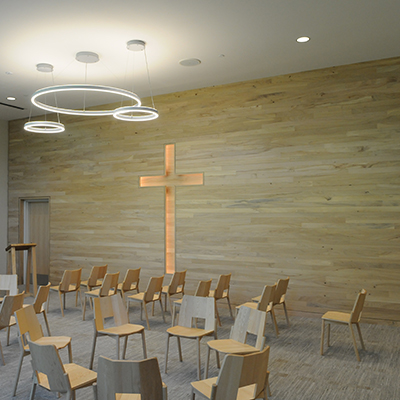 “The trees were present for generations as students attended Hope,” said Dr. Richard Frost, who is vice president for student development and dean of students at the college.  “The boards made from them provide a connection between the past, present and future.  Just as importantly, the wood has become a significant element in the student center being designated as a LEED Gold building.”

The center is the second newly constructed building in a row at the college to earn LEED certification, with plans underway for a hat trick.  The Jack H. Miller Center for Musical Arts that opened in August 2015 holds LEED Silver certification, and Hope will also be seeking certification for the new Campus Ministries building that is under construction and scheduled to be completed next fall.

“Sustainability is an ongoing commitment for us, and constructing buildings with concern for the environment is an important part of that commitment,” said Kara Slater, who is director of operations at the college and is a LEED accredited professional (LEED AP).  “In the same way, the college is dedicated to exercising good stewardship in its day-to-day operations, whether it’s the water-efficient irrigation that we use across campus, installing LED lighting or through the cleaning materials that we use.”

Seeking certification for the student center was a top priority for Frost even when conversations began nearly a decade ago about the building, which he has described as a “family room for students.”

“Our Christian faith calls us to be stewards of all that we do and all that we have,” he said.  “It only made sense to have this building reflect that at the highest levels that we could.  The decision did not take a long time from our faith perspective and also from our construction perspective because it enhanced the building, it demonstrated to our students that sustainability is important and it does our part to save resources rather than use them unwisely.”

The LEED (Leadership in Energy and Environmental Design) rating system, developed by the U.S. Green Building Council, is the foremost program for buildings, homes and communities that are designed, constructed, maintained and operated for improved environmental and human health performance.  Projects participating in LEED are found in all 50 states and more than 165 countries and territories.

The campus trees represent only a portion of the regional material used in the building — fully 30 percent of the material is from the area — and the regional material is just part of what earned the LEED Gold certification.  Other characteristics range from the large, energy-efficient windows that provide generous amounts of daylight, to keeping all storm water on-site, to including a shower to encourage employees to bike to work, to assuring that 21 percent of the building’s content is recycled material, to diverting 91 percent of construction waste from landfills, to installing multiple recycle bins within the building.

Many of the steps that helped earn the student center’s LEED Gold certification are not only environmentally friendly but help create an environment that is itself friendly.  The wood from Hope’s trees provides a connection to the college’s earliest days; the large windows — two stories high in the lounge — offer expansive views of the campus; and the HVAC system includes additional controls that allow for more individual adjustment for comfort.

In addition to the lounge and chapel, the 54,000-square-foot Jim and Martie Bultman Student Center includes the Kletz Market café, a 200-seat multipurpose theater, office and working space for student organizations, and a large flex space for events and student activities, and houses the college’s offices of Diversity and Inclusion, Counseling and Psychological Services, and Student Life.  It is connected to the college’s DeWitt Student and Cultural Center, which opened in 1971 as a student center but gave much of its space to college offices following the April 1980 burning of the Van Raalte Hall administrative building.

The Jim and Martie Bultman Student Center is named for Dr. James E. Bultman, who was the college’s 11th president, and his wife Martie Bultman.  Architectural Design was by Stantec, and construction manager was Granger Construction of Lansing.