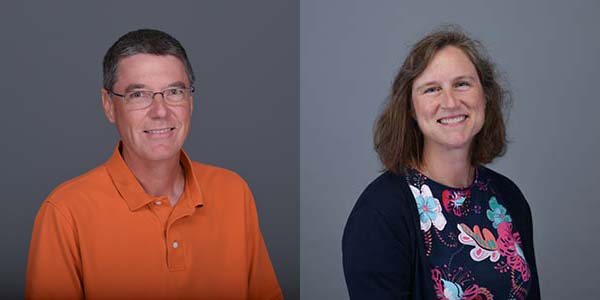 The simulation-based approach to statistics instruction piloted at Hope College has once again earned national recognition.

The Journal of Statistics Education has presented its 2018 “Best Paper” award to Hope mathematics professors Todd Swanson and Jill VanderStoep and six colleagues from other institutions for a paper they co-authored that examines — and affirms — the effectiveness of a simulation-based curriculum for introductory statistics.  It is the fourth time that Swanson, VanderStoep and other co-authors have received national recognition for publications related to their work.

This latest award, named the “Jackie Dietz Best ‘Journal of Statistics Education’ Paper Award” in honor of the journal’s founder, is for the paper “Assessing the Association Between Precourse Metrics of Student Preparation and Student Performance in Introductory Statistics: Results from Early Data on Simulation-based Inference vs. Nonsimulation-based Inference,” published by the journal in August 2018.  It was presented during the Joint Statistics Meetings (JSM) conference held in Denver, Colorado, on July 27-Aug. 1.

The paper examines how much students learned in college-level introductory statistics courses depending on both their mathematics experience before enrolling and whether they were subsequently taught in their college-level courses using traditional methods or the newer approach.  The newer approach won.

“Basically, this paper shows that teaching statistics using simulation-based methods improves students’ understanding of statistics better than traditional methods,” said Swanson, who is an associate professor of mathematics. “This improvement is most pronounced for students coming into the course with weaker mathematical abilities.”

While traditional textbooks first walk students through basic concepts and then build up to the deeper applications, this newer, simulation-based approach introduces the deeper concepts right away and then focuses on filling in students’ understanding as they apply the concepts in various contexts.  The curriculum was piloted at Hope in 2009 with additional implementation at multiple colleges, universities and high schools shaping the development of the textbook “Introduction to Statistical Investigations,” published in 2015.

With much of the paper’s data collected during the development period preceding 2015, Swanson and VanderStoep note that they’re especially gratified that the team’s more recent data have shown even stronger outcomes for students.

“The data used in this paper comes from early versions of our course materials,” said VanderStoep, an assistant professor of mathematics.  “We have seen these same gains in student learning grow more pronounced in recent years.”

Swanson, VanderStoep, Tintle, Chance, Cobb and Roy are among the authors of the 2015 textbook along with Allan Rossman of Cal Poly – San Luis Obispo.  Ruth Carver, of Germantown Academy in Pennsylvania, joined the team to complete an Advanced Placement version of the textbook for use in high school statistics classes in 2018.

The other three previously mentioned national awards include another “Best Paper” award presented during the Joint Statistics Meetings in 2012, for a paper about the new simulation-based approach co-authored by Tintle, Swanson and VanderStoep with Hope colleague Dr. Vicki-Lynn Holmes and 2010 Hope graduate Brooke Quisenberry.  In June 2017, “Introduction to Statistical Investigations” received one of seven Most Promising New Textbook Awards from the Textbook and Academic Authors Association.  Finally, in August 2018, the book received the 2018 Daniel Solow Author’s Award during MathFest 2018, the annual meeting of the Mathematical Association of America.

External support for the development, dissemination and assessment of the simulation-based inference curriculum includes a two-year, $181,478 award and a three-year, $550,099 award from the National Science Foundation.