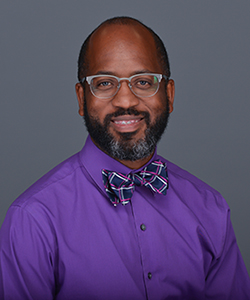 Dr. Gerald Griffin, associate professor of biology and psychology at Hope College, has been named a 2019 Emerging Scholar by Diverse: Issues in Higher Education.

In its first edition each year, Diverse: Issues in Higher Education recognizes 15 minority scholars who represent the best of the U.S. academy based on their research, teaching and overall scholarly contributions.  The magazine’s editorial board selects the scholars, most of whom are under 40, from among hundreds of nominees from throughout the nation. Highlighted in the magazine’s January 24 edition, this year’s honorees represent a range of disciplines in the arts, humanities, natural and applied sciences, and social sciences.

“Gerald Griffin is a gifted and beloved colleague at Hope, and we are proud to call him one of ours,” said Provost Dr. Cady Short-Thompson, who is the college’s chief academic officer.  “He masterfully blends the liberal arts with science in the classroom with topics like neurochemistry jazz. In addition to being a stellar teacher, Gerald is a collaborative and creative neuroscience researcher. On an impressive scholarly trajectory, he brings together colleagues and Hope students to conduct research with others in biology, psychology and chemistry, and has garnered significant external funding for his research.”

Griffin is a neuroscientist and virologist who began his faculty appointment at Hope in the departments of psychology and biology in the fall of 2015.  He has several peer-reviewed publications that represent his dedication to neuroscience research and education. He has mentored and published with more than 30 undergraduate and graduate students, and has been active in numerous science-education opportunities, including being a council member for the Faculty of Undergraduate Neuroscience.

His research interests primarily focus on the reciprocal interactions between viruses and the nervous system.  In 2016, he and his team of Hope student researchers received the college’s “Social Sciences Young Investigators Award” for investigating the normal functioning of the peptide amyloid beta, which has been found in elevated levels as a plaque in the brains of Alzheimer’s patients.  During the college’s Winter Happening event in January 2017, he presented a seminar examining research highlighting the roles of infectious agents in decreasing mental function.

Established in 1984, Diverse: Issues in Higher Education is the only magazine focusing on matters of access and opportunity for all in higher education, and first published its Emerging Scholars edition in 2002.  The honorees are selected based on each scholar’s research, educational background, publishing record, teaching record, competitiveness of field of study and uniqueness of field of study.