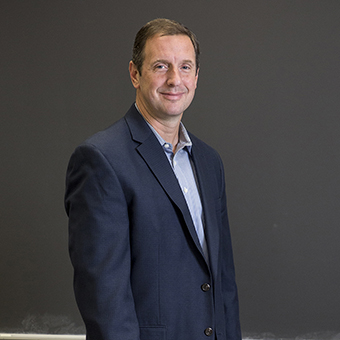 A toleration for frustration: According to Dr. Ryan McFall ’93, it is the key to computer science, because for as quickly as the industry changes, there certainly are a lot of moments stuck seemingly in one place. “I once tried to solve a bug over the course of four years,” he said. “If I didn’t have the ability to tolerate that frustration and be persistent in trying to figure it out, I would have just given up.”

It’s a good thing he didn’t give up: McFall has been an essential part of the Hope faculty since 2000, coding his way from assistant professor to associate professor to a full professor, even spending time as department chair. He’s made great advancements for the college, including digitizing the SALT survey system used by students to evaluate their professors.

About Hope People
Some work directly with students; others behind the scenes. This ongoing series highlights the dedicated faculty and staff who help provide the acclaimed Hope education and community, sharing not only what they do, but why. With more than 800 serving across campus, please return from time to time as the collection of stories grows.

Computer science wasn’t McFall’s original plan as an undergraduate at Hope, where he started off as a secondary math education major. Though he had dabbled in computer programming as a kid, when files were still stored on a cassette tape, and continued his interest as a high schooler, he didn’t realize he would one day make it his career. In fact, he can’t remember what inspired him to take a computer science course at Hope in the first place.

Despite his winding road to get to computer science, he knows he made the right choice. “If there’s a problem where there is an obvious way to apply computers to solve it, then there’s very little I can’t build using a computer program, and that’s really exciting to me,” he said.

Hope has also proven to be the right place for McFall. After he finished his Ph.D. at Michigan State University, it seemed natural to return to the place that became home during his undergraduate years. Here, he is able to engage with research and scholarship while allowing his primary focus be on teaching. The opportunity to see first-year students develop into successful computer scientists “thinking the way a computer scientist thinks” and making an impact outside of Hope is a highlight of his job.

It really is the students who motivate McFall in his work. Computer science, he notes, is a unique field, as no year is the same as the last. “It’s one of the best things about teaching computer science and it’s one of the worst things about teaching computer science,” he says with a laugh. “It takes a lot of work to stay on top of the industry.” But he wouldn’t have it any other way. “I can’t imagine teaching the same thing for 20 years without change. It’s exciting there’s often something new.”