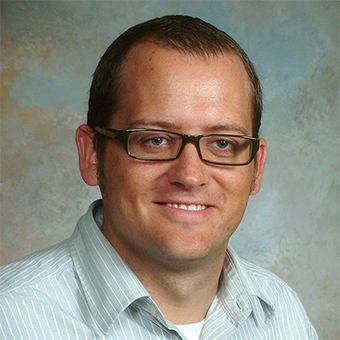 Dr. Brian Yurk of the Hope College mathematics faculty is co-author of a scholarly paper that has been named the best of 2017 and 2018 by the Journal of Biological Dynamics.

The article, which Yurk wrote with Dr. Christina Cobbold of the University of Glasgow in Scotland and was published in the Journal in December 2017, presents equations to help ecological researchers better understand the population patterns of animals.  It has received the journal’s Robert May Prize, awarded every other year for the best paper in the journal during a two-year period.

Titled “Homogenization techniques for population dynamics in strongly heterogeneous landscapes,” the paper provides a way to model how long-term dispersal patterns of animal populations are shaped by how individuals respond to the variability they encounter in their environments from day to day.

“Population-level patterns emerge from individual-level processes of movement, reproduction and death,” the authors write.  “Such processes are influenced by local landscape features as individuals adjust their behavior to their surroundings.”

Yurk and Cobbold illustrate their approach with bird populations, but explain that it can be applied to multiple species.

“For example, predation risk for many songbirds is higher in open fields than in dense forest cover,” they note.  “Accordingly, many birds tend to avoid open areas, or move through quickly.”