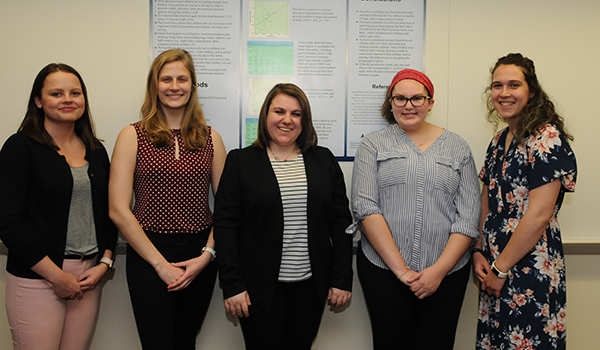 Want your preschooler to sleep better and have a better day? You might consider making more physical activity a part of it.

That’s the relationship that is indicated by a recent collaborative student-faculty research project conducted at Hope College.  The two-year study has won this year’s Social Sciences Young Investigators Award at Hope.

Studying 82 preschoolers ages 3-5, the research team found that the children who were more physically active during the day generally had higher-quality sleep. 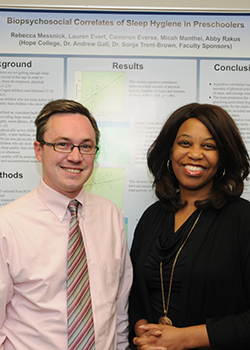 “Our study focuses on factors in the home and school environments that are associated with good sleep hygiene in preschoolers,” said Dr. Andrew Gall, an assistant professor of psychology who has been one of the project’s two faculty mentors.  “The more physically active preschoolers are, the more sleep they’re able to get.”

The results seem intuitive — get more tired while exercising, and sleep better when tired — but scientists are careful about mixing correlation and causation, so Gall won’t go so far as to say that the study proves that increased activity yields improved sleep.  “We don’t know exactly what’s causing preschoolers to get better sleep, but we do know that those two things are associated,” he said.

The research team also found that the children who had higher quality sleep generally did better at using their working memory to explore and experience their settings, like playing with different toys or navigating the playground at school.  Children who were more physically active also showed better working-memory capacity.

To generate data, the researchers had the children wear Fitbits for 12 weeks.  The team defined physical activity as the number of steps that the children took, and also chronicled the average minutes of sleep.  For preschoolers, Gall said, the recommendation is 11-13 hours per night.

The children’s parents were also involved in the study, maintaining journals that kept track of sleep habits by recording bedtimes and wake times.  Consistency, and earlier bedtimes and earlier wake times, also correlated to better sleep.

The research project was led by Gall and Dr. Sonja Trent-Brown, who is the John H. and Jeanne M. Jacobson Professor of Psychology and the college’s chief officer for culture and inclusion.  The five students who worked with them were junior Rebecca Messnick of Milwaukee, Wisconsin; junior Lauren Evert of Sterling Heights; senior Cameron Everse of Hamilton; senior Micah Manthei of Leslie; and sophomore Abby Rakus of Grand Rapids.

The Social Science Young Investigators Award is for a relatively junior member of the Hope faculty who conducts research with students.  Gall has taught at Hope since 2015 and is this year’s honoree.  Trent-Brown, who joined the faculty in 2005, won the inaugural award in 2010 for another research project.  Cognitive and neural sciences are Trent-Brown’s specialties as an experimental psychologist, and she conducts original empirical research in psycholinguistics, psychoacoustics and child development.

“One of the first people that I met in my interview was Sonja, and we immediately started talking about how we could collaborate,” Gall said.

The two professors are continuing to work together by writing a children’s book to further promote the importance of good sleep (anticipating that the parents who read it to their children will learn from it as well).  They are also writing an article about the research study to submit to a professional journal in developmental psychology or sleep studies.

In addition, they’re not quite done with the 2017-18 project.  They intend to share what they learned during the study with the parents whose preschoolers participated.  “One of the pieces that we’re going to be following up on is providing parents with specific feedback about their own children,” Gall said.

Gall specializes in behavioral neuroscience by studying the biological bases of behavior.  His research interests primarily focus on understanding the neural mechanisms and functions of sleep and circadian rhythms.  He has studied sleep since 2004, while pursuing his doctoral degree in psychology at the University of Iowa, from which he also holds his bachelor’s degree and master’s, also in psychology.

The Social Sciences Young Investigators Award is designed to recognize and encourage junior faculty to partner with students in research collaborations that further the scholarship goals of the faculty member while developing the skills of critical inquiry and analysis in his or her students.  It includes funding for the faculty and student team to present the work at a professional conference.

The competition is open to junior social science faculty who worked with students on a significant research project, with at least one of the students returning for the next academic year.  The selection is made from among the eligible social science projects highlighted during the college’s annual Celebration of Undergraduate Research and Creative Activity, which was held on Friday, April 12, this year.