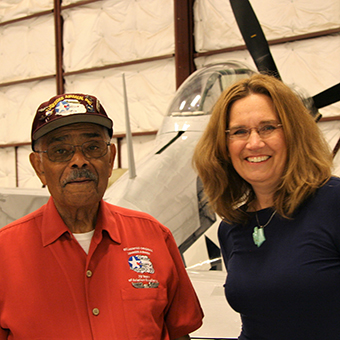 Franklin J. Macon, who as a Documented Original Tuskegee Airman during World War II was among the first African American military aviators in the U.S., will speak at Hope College on Tuesday, Feb. 19, at 4 p.m. in Winants Auditorium of Graves Hall.

He will be speaking with 1991 Hope graduate Elizabeth Blom Harper, who with him wrote “I Wanted to Be a Pilot: The Making of a Tuskegee Airman,” published in November.  Geared toward teens, the book tells how Macon overcame life’s obstacles — including dyslexia, repeating a grade in school and being raised by two great aunts — to achieve his dream of flight.  The event is scheduled in conjunction with national Black History Month, which is February.

Macon is among the fewer than 100 Documented Original Tuskegee Airmen still living.  The group takes its name from Tuskegee, Alabama, and Tuskegee University, where all of the airmen trained at a time when the U.S. military was still racially segregated.  Macon, who has lived in Colorado Springs, Colorado, since 1923, learned to fly while still in high school as a member of the Civil Air Patrol Cadet Program.  He enlisted in the Army Air Corps in 1943 and joined the Tuskegee training program in 1944, spending his wartime military service in the U.S.  In addition to being trained as a pilot, his later career included serving as a civilian aircraft inspector at Fort Carson Army Post for 23 years and a research analyst for Scott Science and Technology.

Harper, who majored in education and English at Hope, works with troubled and adjudicated children and has spent more than 25 years in education.  Raised in Hudsonville, she now lives in Colorado Springs with her husband, Lew, who is a retired Air Force Lieutenant Colonel, and the couple’s children.  She and Macon decided to write “I Wanted to Be a Pilot: The Making of a Tuskegee Airman” while driving home from Macon’s 92nd-birthday flight at the United States Air Force Academy in August 2015.