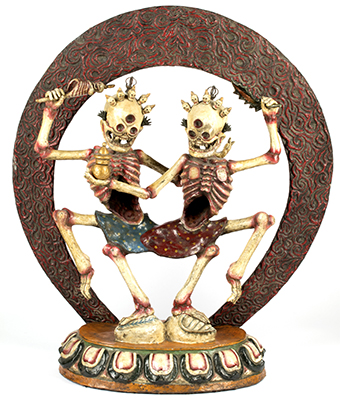 Lords of the CemeteryCampus News

The exhibition “Deities and Devotion in Mongolian Buddhist Art” will open at the Hope College Kruizenga Art Museum on Friday, Aug. 30.

A reception will be held to celebrate the opening of “Deities and Devotion,” and the Kruizenga Art Museum’s focus exhibition “Capturing Light: The Art of Shin Sawano, A Tradition for the Future of Japan,” on Friday, Sept. 6, from 5 p.m. to 7 p.m. There will be remarks at 5:30 p.m.

The public is invited to both exhibitions and the reception.  Admission is free.

“Deities and Devotion in Mongolian Buddhist Art” explores the role that art plays in the religious beliefs and devotional practices of Mongolian Tantric Buddhism. The exhibition features 130 paintings, drawings, prints, sculptures and ritual objects from the Kruizenga Art Museum collection and a California private collection.  Most of the artworks date from the 19th and early 20th centuries, and many of the paintings, sculptures and other objects were used in devotional rituals by both ordained clerics and lay believers.

Tibetan monks helped establish Tantric Buddhism — also called Vajrayana Buddhism — as the dominant form of Buddhism in Mongolia in the 16th century.  Tantric Buddhism uses sacred incantations, secret gestures, sophisticated meditation and visualization techniques, and complex devotional rituals to help adherents progress toward a state of spiritual enlightenment. Many tantric worship practices are directed toward specific deities that embody either positive qualities that the practitioners are trying to cultivate, or negative qualities they are trying to eliminate from within themselves.

Buddhism was officially suppressed by the communist government in Mongolia from the 1920s through the 1980s, and much institutional Buddhist art was lost when the state tore down thousands of temples and monasteries throughout the country. Many of the works that did survive were saved because they were either small in size or easily concealed in some other way. When the Mongolian communist government fell in 1991, thousands of paintings and other artworks resurfaced and helped pave the way for the resurgence of Buddhist culture in Mongolia.

“Art plays a significant role in Tantric Buddhist practice,” Mason said.  “Art is used to teach key aspects of Tantric Buddhist doctrine and history. Paintings, sculptures and other works provide followers with a material connection to deities, and help them to imagine the deities they are invoking. Some artworks also function as talismans, granting protection or good fortune to their owners.”

“Deities and Devotion in Mongolian Buddhist Art” was organized by the staff of the Kruizenga Art Museum. Most of the artworks featured in the exhibition were donated or loaned by California-based collectors David Kamansky and Gerald Wheaton. Funds for the purchase of additional artworks were donated by Dr. Ronald ’62 and Gerri Vander Molen.  Assistance with designing the exhibition and preparing the artworks for display was provided by the museum’s spring 2019 John H. Dryfhout ’64 Intern, Garrett Fixx, a Hope senior. The accompanying exhibition catalog was designed and produced by Tom Wagner, a 1984 Hope graduate. The exhibition will run through Saturday, Dec. 14.

Admission to the Kruizenga Art Museum is always free. Public visiting hours are Tuesdays through Saturdays from 10 a.m. to 4 p.m.  Please check the museum’s website or social media for additional information about special programs and events related to “Deities and Devotion in Mongolian Buddhist Art.”  Because of the Thanksgiving holiday, the museum will be closed Thursday-Saturday, Nov. 28-30.