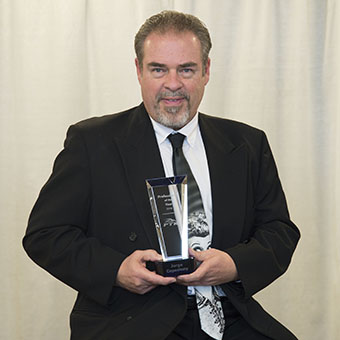 Jorge Capestany, manager of the DeWitt Tennis Center and director of the professional tennis management program at Hope College, has earned yet another prominent award for his work in the tennis world. The Professional Tennis Registry (PTR) has named him its 2019 Professional of the Year.

The award recognizes the person who best exemplifies the mission of PTR, which is to educate, certify and serve tennis teachers and coaches around the world in order to grow the game. Capestany received the honor on Tuesday, Feb. 12, at the annual awards ceremony during the PTR International Tennis Symposium.  The symposium, which includes more than 40 educational presentations for tennis coaches, was held on Hilton Head Island, South Carolina.

A PTR International Master Professional, Capestany is one of only a handful of coaches who are both PTR and USPTA Master Professionals.  He is also a certified mental toughness specialist through Human Performance Institute and he holds a USTA Sports Science certification.

In 2015, he also received numerous prestigious honors for his work in the tennis industry. That year he was the winner of the Alex Gordon Professional of the Year Award from the United States Professional Tennis Association (USPTA), inducted into the USPTA Midwest Hall of Fame, and named the USPTA Member of the Year by Tennis Industry magazine.

In its news release announcing the award, the PTR noted that Capestany is “sought after as speaker who presents at the most prestigious national and international tennis conferences. His service to the industry is equally impressive.”

Capestany is the first director of the Hope College Professional Tennis Management (PTM) program and is responsible for the creation of its curriculum and teaching tennis-related classes.  PTM programs allow college students to study tennis management while earning a bachelor’s degree. At Hope College, students can choose any major and will also complete a kinesiology minor which requires specific courses as part of the USTA PTM requirements. The tennis portion of the PTM curriculum is mostly experiential learning through several on-hands “labs” at the DeWitt Tennis Center. PTM students graduate as certified teaching professionals prepared for a job in the tennis industry.

Dr. Kirk Brumels, professor of kinesiology and chair of the department that also oversees the college’s PTM program, credits Capestany with being instrumental in connecting Hope College and the USTA as partners in creating and offering the college’s PTM-certified program.

“This is such a well-deserved award for Jorge,” Brumels said. “We are fortunate to have such a well-recognized tennis professional working right here in Holland and at Hope College. This award recognizes at the national level what we have known locally about Jorge for a long time. His tireless advocacy for the playing and teaching of tennis as well as improving the tennis industry is unequaled.”

As a personal tennis coach in Michigan, Capestany has developed more than 180 high school state tennis champions. In addition, he is an author of three books, including the “PTR International Book of Drills,” as well as an entrepreneur with several web-based ventures, including TennisDrills.tv that has thousands of coach-subscribers in 65 counties, and JorgeCapestany.com, featuring video lessons for players of all levels.

Capestany has served as chair of the PTR Education Committee, chair of USTA National 10 & Under Committee, president of USTA West Michigan District, and USPTA Midwest Division president.  He was also part of the original Cardio Tennis team, delivering workshops and training coaches in Cardio Tennis. He continues to serve as a USTA faculty member, is on the Wilson Premiere Speakers Team and serves as a consultant to many tennis clubs.

PTR is the largest global organization of tennis teaching professionals with more than 16,500 members in 125 countries. It has the greatest percentage of multicultural and women members of any such organization.