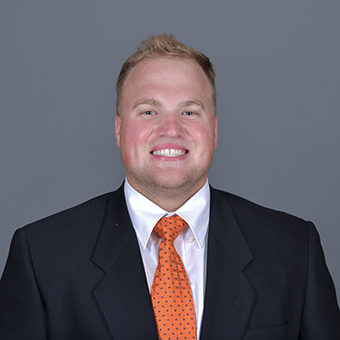 In a snap, Zach Smith started everything for the Hope College football team’s high-powered offense. The senior center from Suttons Bay, Michigan (Suttons Bay HS) stood out this season for the Flying Dutchmen.

Smith has been chosen as the NCAA Division III recipient of the Rimington Trophy, which is presented annually to the most outstanding centers in NCAA football. He is Hope’s and the Michigan Intercollegiate Athletic Association’s first honoree.

“I’m truly honored. It’s hard to put into words,” Smith said. “I couldn’t have done it without the team. Individual awards are nice, but to win the conference championship with the guys this year is the biggest award for me. We’ve been pushing for that for four years.”

Dave Rimington, the award's namesake, was a consensus first-team All-America center at the University of Nebraska in 1981 and 1982, during which time he became the John Outland Trophy's only two-time winner as the nation's finest college interior lineman.

Smith, a two-time, All-MIAA First Team offensive lineman, anchored the blocking for the MIAA's top scoring offense at 46.0 points per game and second-ranked total offense at 439.7 yards per game.

Hope posted the second nine-win season in team history with a 9-2 overall record in 2019. The Flying Dutchmen went 7-0 in league play for the team’s 21st league championship all-time and their fifth NCAA playoff appearance.

Earlier this month, Smith was named an American Football Coaches Association First Team All-American and a first-team, all-region center by D3football.com. The D3football All-America honors are announced later this week.

"The heart and soul of the O-line,” head coach Peter Stuursma said of Smith. “A three-year starter and a two-time captain, Zach has never missed a practice or a rep with the first unit. He is durable, tough and as strong as anyone we have had here at Hope College."

The Rimington Trophy is a member of the National College Football Awards Association. The NCFAA encompasses the most prestigious awards in college football. Founded in 1997, the NCFAA and its 25 awards now boast over 800 recipients, dating to 1935.

Since its inception 20 years ago, the Rimington Trophy has raised over $4.45 million for the Boomer Esiason Foundation, which is committed to finding a cure for cystic fibrosis.