New Campus Ministries House to Be Dedicated on Aug. 29 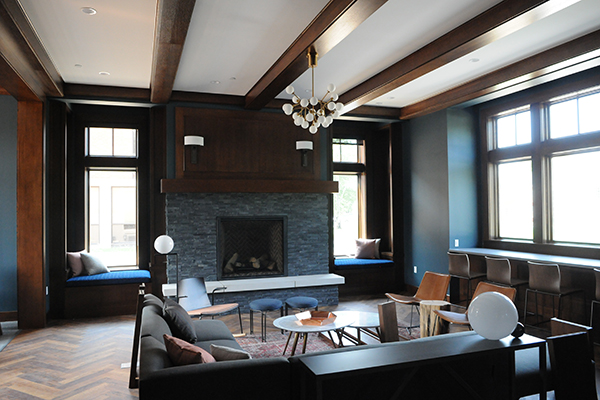 Hope College will dedicate its new Campus Ministries house on Thursday, Aug. 29, with a brief ceremony at 5 p.m. followed by an open house that will provide an opportunity to tour the facility.

Although the event will include a ribbon cutting, the building is already being put to work:  The staff moved in earlier this month in anticipation of the new academic year.  The college’s incoming freshman class arrives on Friday, Aug. 23, and fall-semester classes begin on Tuesday, Aug. 27.

Standing in the central campus, the 11,000-square-foot, two-story building has been named the van Andel Huys der Hope in honor of a leadership gift from the David and Carol Van Andel Family Foundation.  It has succeeded the Keppel House on 10th street, a stately former residence which had housed the program since 1994 but became inadequate as Campus Ministries programming and student interest have grown.  The new facility includes small and large gathering spaces, a commons area, a library that can also be used for meetings, a prayer alcove and expanded office space for the staff, which was previously spread among other locations.

Its exterior was designed to complement the surrounding campus architecture, including the Jim and Martie Bultman Student Center immediately to the north.  Its entrance is framed by a covered front porch that faces Van Raalte Commons and the Pine Grove.  Within, much of the first floor features wood paneling and trim reminiscent of the Keppel House interior.

Site preparation began in the summer of 2018.  To make way for the new building, the Delta Phi Cottage, a sorority house, was demolished, and the internationally themed Fried Cottage was moved to Columbia Avenue between 14th and 15th streets.

The total project cost was $6 million, including the site preparation, construction, and an endowment for ongoing maintenance and building operations.  Architectural design was by AMDG Architects of Grand Rapids, and the construction manager was Lakewood Construction of Holland.

Completely funded through gifts to Hope, the new building was part of the college’s “Faith Formation Initiative,” a “micro campaign” that also provided endowment for a new chaplain in athletics and for programming.  The campaign has supported the college’s strategic plan, “Hope for the World 2025,” which across multiple goals — from academics, to Christian formation, to global engagement to community — emphasizes helping students engage with the Christian faith and understand how it can inform them as they study, pursue vocation, and live in community with others in a diverse and interconnected world.

The athletics chaplaincy, funded with a $2 million endowment, serves the approximately 500 students, more than 50 coaches as well as athletic training staff who are involved in athletics at the college, not only linking Campus Ministries and a major co-curricular program more closely but also providing pastoral care grounded in understanding of the students’ experience and sometimes-unique concerns.  The remaining $3 million being raised for endowment is helping to underwrite programming and some of the current staffing, so that the work does not result in a greater cost for families.

The Campus Ministries program took its current form — a dean of the chapel leading a team of chaplains and additional staff — during 1993 and 1994, through an expansion funded by the college’s Hope in the Future comprehensive campaign, which included strengthening Christian life and witness as one of its four primary components.  The college had previously had a chaplain and assistant chaplain whose offices were located on the lower level of Dimnent Memorial Chapel.

The Campus Ministries house is located at 110 E. 12th St., at the center of the Hope campus between College and Columbia avenues along the former 12th Street.