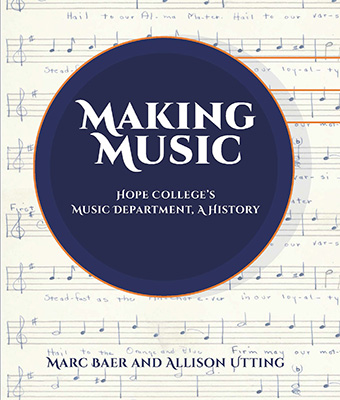 A new book published by the Van Raalte Press at Hope College chronicles the development and impact of the nationally accredited Department of Music at Hope College.

“Making Music: Hope College’s Music Department, A History” tells the story of the popular demand for music across more than 150 years.  It presents a through-line that runs from hymns during worship (a practice that continues) and informal student clubs during Hope’s earliest days, to the modern academic program that developed after World War II and since 2015 has resided in the state-of-the-art Jack H. Miller Center for Musical Arts.

Published in August, the book was co-written by Dr. Marc Baer and Allison Utting.  Baer is a professor emeritus of history who also served as interim dean for the arts and humanities and interim chairperson of the Department of Music, and was a visiting research fellow at the Van Raalte Institute during 2018.  Utting is a 2018 Hope graduate who majored in secondary social studies education and minored in history and is an eighth-grade history teacher in Byron Center.

Baer and Utting trace the history via six chapters.  These explore how the department arose in the era between the 1860s and the 1940s; students as makers of music through both the department and independently; the program’s facilities; an overview of the different types of music performed at Hope throughout the year; and the role of music as a bridge between the college and community.

“It is safe to say that by 2015 musical performances ranked second in terms of audience, just after collegiate athletics,” the authors wrote in their introduction.  “At the same time, what those audiences heard in the century and a half covered in this book [1866-2015] was characterized by both change and continuity.  Some significant events disappeared, for example, annual performances of Handel’s ‘Messiah’ and the All-College Sing.  Other events, such as Christmas Vespers and the Musical Showcase, have become vital to the musical rhythm of the year.”

Among other tidbits:  The eight members of the college’s first graduating class, in 1866, sang an ode written by President Philip Phelps Jr. set to music composed by a classmate.  Although the program has been accredited since 1959 and the Bachelor of Music degree that Hope offers today goes back to 1967, Hope had also offered a Bachelor of Music degree from 1925 to 1934, earning Cornelia Nettinga of the Class of 1927 distinction as Hope’s first B.Mus. graduate.  While some ensembles are enduring and beloved traditions, like the Chapel Choir touring nationally and internationally, others have been products of their time, like the 15-member Ladies’ Ukulele Orchestra, a student-formed group that existed briefly in the 1920s.  From 1907 to 1940, the Voorhees residence hall not only housed students but also the department.

Conducting research primarily at the Joint Archives of Holland, Baer and Utting developed the book using a wide range of sources including college records, period newspaper and yearbook stories, oral-history interviews with music faculty members recorded in earlier years, and interviews that they conducted themselves.  They dedicated the book to the late Charles Aschbrenner, who retired in 2008 after teaching at Hope since 1963 and had previously been developing a history of the department.

The narrative is accompanied by an appendix that lists everyone ever hired by the college to teach music, a cadre of more than 240 across Hope’s history that began with William Gilmore, who served as a part-time tutor from 1862 to 1869.  Accordingly, although Baer and Utting discuss the significant role played by John Nykerk, who taught at Hope and the Holland Academy from which it grew from 1885 to 1936 and is traditionally considered the department’s founder, they emphasize — and highlight — the work of the many others who preceded and followed him.

“While it is true that Nykerk shaped what would become a department to fit a modern form, it is equally true that the department’s foundation goes back to the first days of the college, because music has always been taught at Hope — even before the college graduated its first class,” they wrote.

Van Raalte Press is the publishing arm of the Van Raalte Institute at Hope.    Established in 1994, the institute is located in the Theil Research Center at 9 E. 10th St. and specializes in scholarly research and writing on immigration and the contributions of the Dutch and their descendants in the United States.  The institute is also dedicated to the study of the history of all the people who have made up the community of Holland throughout its history.  Since its founding, the institute and its affiliated scholars have published nearly 40 books.

“Making Music: Hope College’s Music Department, A History” has 232 pages and is available in paperback for $15.  It may be purchased through Amazon or the Hope College Bookstore.