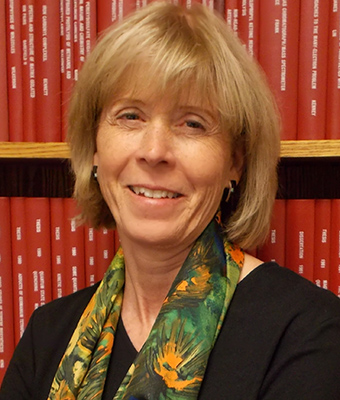 Lectures to Focus on Biomedical Implications of DNA Research

Dr. Cynthia J. Burrows of the University of Utah will focus on biomedical implications of DNA research through two lectures that she will present while at Hope College on Thursday and Friday, Feb. 20-21.

The public is invited to both talks.  Admission is free.

Her visit is being supported by two speaker series:  the college’s James and Jeanette Neckers Lectureship in Chemistry and the national Phi Beta Kappa Visiting Scholar Program.

Burrows will present “Beyond Watson & Crick: the DNA Quadruple Helix from Cancer to Zika” on Thursday, Feb. 20, at 7 p.m. in Winants Auditorium of Graves Hall.  Intended for a general audience, the address will consider how the DNA double helix first drawn in 1953 is not a static repository of genetic information but changes on a daily basis, and the implications for biomedical research in a variety of areas, such as aging, cancer and viral diseases like Zika.

She will present “Free Radical Oxidation of Guanine — Mutagenic or Epigenetic?” on Friday, Feb. 21, at 4 p.m., also in Winants Auditorium of Graves Hall.  The technically oriented talk will center on her research group’s investigation into the biochemical processes related to DNA, including both how it is damaged or mutated, and how it is repaired.

Burrows is the Thatcher Presidential Endowed Chair of Biological Chemistry and Distinguished Professor of Chemistry at the University of Utah. Her research program investigates the organic and biological chemistry of DNA and RNA base modifications with a focus on free radical chemistry of guanine, the most easily oxidized base in the genome.  Modifications to DNA bases are often mutagenic and underlie age-related disorders such as cancer.  Recently, her lab has turned to whole genome sequencing to analyze the impact of oxidative stress, and has uncovered epigenetics aspects of DNA oxidation that regulate gene expression.

She was inducted into the American Academy of Arts and Sciences in 2009 and elected to the National Academy of Sciences in 2014. Burrows is the author of approximately 200 research articles and 10 patents, and serves as editor-in-chief of the ACS journal Accounts of Chemical Research.

The James and Jeanette Neckers Lectureship and Student Assistance Fund through which Burrows is speaking was established in 1984 by Dr. James W. and Jeanette Hoffman Neckers, members of the college’s Class of 1923, to support annual lectureships in chemistry. Through additional gifts from Dr. Neckers, the fund was expanded to include student summer research stipends and student scholarships.

James Neckers was chairman of the Department of Chemistry at Southern Illinois University at Carbondale for 37 of his 40 years at the university. Under his leadership, the department grew from a three-year offering in chemistry to granting the doctorate, and the faculty grew from three to 23. Jeanette Neckers died on June 10, 1992, and James Neckers died on May 8, 2004.

The national Phi Beta Kappa honor society’s Visiting Scholar Program makes scholars in a variety of fields available to campuses that have a Phi Beta Kappa chapter.  As described on Phi Beta Kappa’s website, the purpose of the program is to contribute to the intellectual life of the institution by making possible an exchange of ideas between the visiting scholars and the resident faculty and students.  The visiting scholars travel to more than 100 colleges and universities each year, spending two days on each campus, meeting informally with students and faculty members, participating in classroom discussions and seminars, and giving a public lecture open to the academic community and the general public.