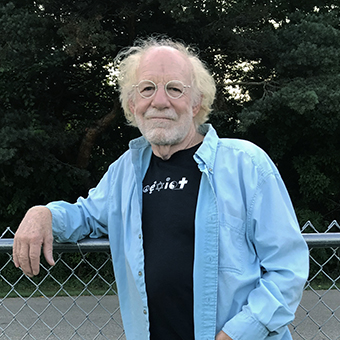 Poetry Journal Highlights the Poetry and Career of Jack Ridl

The Spring 2020 issue of the Innisfree Poetry Journal is highlighting the poetry and career of Jack Ridl, professor emeritus of English at Hope College.

Published since 2005, the biannual online journal features work by contemporary American poets, selecting one leading writer for each issue’s “Closer Look” profile that includes a biographical article and several of the poet’s works.  The Spring 2020 issue released earlier this month shares 36 of Ridl’s poems drawn from multiple collections published between 1984 and 2019.  The issue also includes work by 27 other poets.

Ridl taught at Hope from 1971 until retiring in 2006.  He is the author or editor of several collections of poetry, and has also published more than 300 poems in journals and has work included in numerous anthologies.  In addition, he has read his work and led workshops at colleges, universities, art colonies and other venues around the country.

He has received multiple honors for his collections.  “Practicing to Walk Like a Heron,” received Gold recognition for poetry in the 2013 IndieFab Awards competition sponsored by Foreword Reviews magazine and in 2014 was named an “Editor’s Pick” by the quarterly poetry journal Rattle.  The anthology “Poetry in Michigan/Michigan in Poetry,” which he co-edited with award-winning poet Dr. William Olsen of the Western Michigan University English faculty, was named a 2014 Michigan Notable Book.  His collection “Losing Season” was named the 2009 “Sports Education Book of the Year” by the Institute for International Sport at the University of Rhode Island.  The Society of Midland Authors named his collection “Broken Symmetry” one of the two best volumes of poetry published in 2006.  In 2001, his collection “Against Elegies” was chosen by Billy Collins as the winner of the “Letterpress Chapbook Competition” sponsored by the Center for Book Arts of New York City.  In addition, in 2019, the city council of Douglas, where he lives, named him to a lifetime appointment as the community’s first poet laureate.

Ridl’s other volumes include “Saint Peter and the Goldfinch,” “The Same Ghost,” “Between,” “After School,” “Poems from ‘The Same Ghost’ and ‘Between,’” and “Outside the Center Ring.”  In addition to his volumes of poetry, he is co-author, with Hope colleague Peter Schakel, of two textbooks, “Approaching Poetry: Perspectives and Responses” and “Approaching Literature.” They also co-edited two anthologies.

Ridl also received recognition both at Hope and beyond for as a master teacher and for service.  In 2014, the Poetry Society of Michigan appointed him honorary chancellor in recognition of the high quality and beauty of his poetry and his participation in and support of the society, and the Community Literacy Initiative presented him a Community Literacy Award in the area of Talent for outstanding contributions in increasing literacy levels and sustained depth and breadth in commitment to the advancement of literacy in West Michigan.  In 1996, he was chosen Michigan’s “Professor of the Year” by the Carnegie Foundation for the Advancement of Teaching.  More than 90 of Ridl’s former students are now publishing.

At Hope, the college’s graduating class presented him with the “Hope Outstanding Professor Educator Award” in 1976; he received the faculty appreciation award from the student body during Homecoming in 2003; and the graduating seniors selected him to present the Commencement address in both 1975 and 1986.  The college’s Visiting Writers Series, which he co-founded in 1982 with his wife Julie Garlinghouse Ridl, was named in his honor in 2006.

Westminster College, from which he holds both his bachelor’s and master’s degrees, presented him with an “Alumni Citation Award” in September 2005.