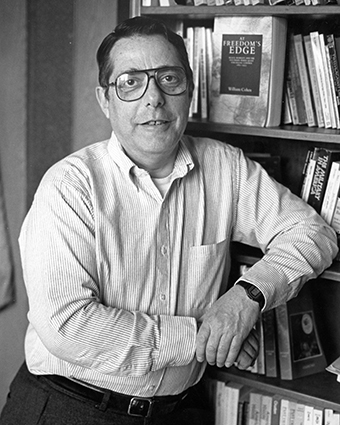 He was born in Los Angeles and at age 10 moved to Brooklyn.  After earning his bachelor’s degree from Brooklyn College and his master’s from Columbia University, he served in the U.S. Army.  He subsequently earned his doctorate from New York University, at the same time serving as a lecturer in history at Hunter College of the City University of New York.  After completing his Ph.D., he moved to Chicago, where he worked with the late Professor John Hope Franklin at the Center for Urban Studies at the University of Chicago.

He joined the Hope faculty in 1971. He taught generations of Hope history students in the History Seminar, a rigorous capstone experience which he designed and taught for many years.  He also mentored Hope students who applied for Rhodes and Marshall Scholarships.  In 2001, he received the college’s Provost’s Award for Excellence in Teaching (now called the Janet L. Andersen Excellence in Teaching Award).

His publications during his career prior to coming to Hope included the 1960 article “Thomas Jefferson and the Problem of Slavery,” a significant re-examination of Jefferson’s understanding of the institution of slavery.  While at Hope, he published his 1991 monograph “At Freedom’s Edge: Black Mobility and the Southern White Quest for Racial Control, 1861-1915,” which received the Southern Historical Association’s Francis Butler Simkins Award.  He also wrote numerous articles and book reviews for scholarly publications, and made a number of presentations at professional meetings.

After retiring, he taught at Hope part-time through the fall 2003 semester.  Also in retirement, he served as a Fulbright Scholar, teaching American history in Japan.

Interment will be in the Temple Emmanuel section of Oak Hill Cemetery in Grand Rapids.

Additional biographical information and suggestions for memorial contributions to United We Dream and the Southern Poverty Law Center in lieu of flowers are available in the online obituary prepared by the funeral home.