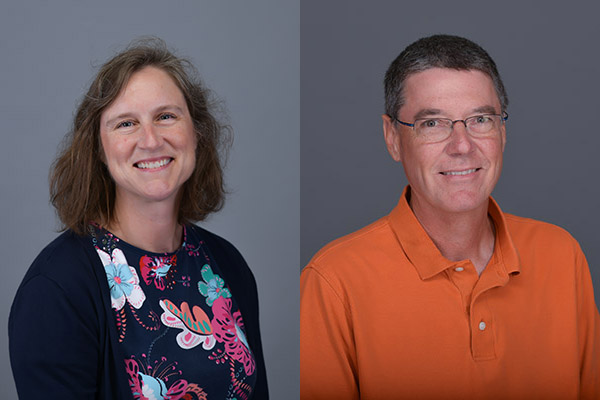 Todd Swanson and Jill VanderStoep of the Hope College mathematics and statistics faculty are among the co-authors of a new intermediate statistics textbook and the new second edition of the introductory textbook that preceded it.

The second edition of “Introduction to Statistical Investigations” and the first edition of “Intermediate Statistical Investigations” were both published in September by John Wiley & Sons of Hoboken, New Jersey.  Both texts use simulation-based techniques, deep conceptual understanding and real research studies to help students understand statistical methods involving multiple variables.

While traditional textbooks first walk students through basic concepts and then build up to the deeper applications, “Introduction to Statistical Investigations” introduces the deeper concepts right away and then focuses on filling in students’ understanding as they apply the concepts in various contexts.  The first edition was published in 2015, with a revised version for Advanced Placement high school classes published in 2018.

“Intermediate Statistical Investigations” is for courses that immediately follow an introductory course.  Each chapter contains in-depth exercises which follow a consistent six-step statistical exploration and investigation method (ask a research question, design a study, explore the data, draw inferences, formulate conclusions, and look back and ahead) enabling students to assess a variety of concepts in a single assignment. End-of-chapter investigations expose students to various applications of statistics in the real world using real data from popular culture and published research studies in variety of disciplines.

The approach used in the series was piloted at Hope beginning in 2009, with additional implementation at multiple colleges, universities and high schools as the text was developed.  It was initiated at Hope in conjunction with the creation of the college’s statistical teaching and research computing laboratory through a 2008 grant from the Howard Hughes Medical Institute.

Swanson is an associate professor of mathematics and statistics, and VanderStoep is an assistant professor of mathematics and statistics instruction.  The lead author of both the introductory and intermediate textbooks is Dr. Nathan Tintle, a professor of statistics at Dordt University who was on the Hope faculty as development of the books’ approach began. In addition to Swanson, VanderStoep and Tintle, the co-authors of the new edition of “Introduction to Statistical Investigations” are Dr. Beth L. Chance, Dr. Allan J. Rossman and Dr. Soma Roy, all of whom are members of the statistics faculty at California Polytechnic State University; and the late Dr. George W. Cobb, an emeritus member of the Mount Holyoke College mathematics and statistics faculty who died on May 6 of this year.  Dr. Karen McGaughey, of California Polytechnic State University, joined the author team as a co-author on the “Intermediate Statistical Investigations” textbook.

“Introduction to Statistical Investigations” and scholarly articles about its methodology have earned multiple national awards.  The textbook received one of seven Most Promising New Textbook Awards from the Textbook and Academic Authors Association in 2017, and received the Daniel Solow Author’s Award during the annual meeting of the Mathematical Association of America in 2018.  A paper about the new simulation-based approach co-authored by Tintle, Swanson and VanderStoep with Hope colleague Dr. Vicki-Lynn Holmes and 2010 Hope graduate Brooke Quisenberry received a “Best Paper” award during the Joint Statistics Meetings in 2012.  In 2019, Swanson, VanderStoep and six colleagues from other institutions — Tintle, Chance, Roy, Cobb, Jacob Clark of the University of Iowa and Karen Fischer of the Mayo Clinic — received the “Jackie Dietz Best ‘Journal of Statistics Education’ Paper Award for a paper they co-authored that examined and affirmed the effectiveness of the curriculum for introductory statistics.