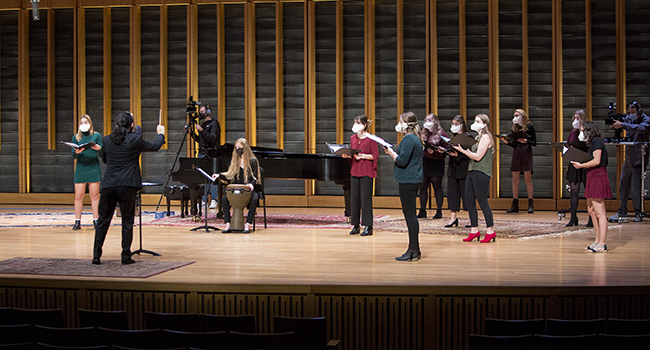 This year’s Christmas Vespers service at Hope College has been prerecorded and will be shown online beginning on Saturday, Dec. 5, at 7:30 p.m. It is an adjustment born of necessity that has also enabled the organizers to blend beloved elements from the traditional event with some new additions.

Out of an abundance of caution due to the global COVID-19 pandemic, there will be no in-person audience.  Instead, the music-filled worship service, now in its 80th year, will be featured on the college’s YouTube channel, where it will remain for viewing not only throughout the Advent season but beyond.  The service is approximately an hour long.

The exclusively virtual format is a first for Christmas Vespers, which since beginning in 1941 has always had an audience on-site.  While portions of this year’s service such as the scriptural readings take place in the event’s traditional home of Dimnent Memorial Chapel, most of the musical performances were recorded in the Jack H. Miller Center for Musical Arts to better accommodate both physical distancing of the participants and technical needs.

Rather than be discouraged by the situation, faculty organizer Eric D. Reyes and his colleagues across the college and students have embraced the circumstances as an opportunity to complement the program’s traditional elements with new features, some possible only because of the change in format and venue.  Reyes hopes the result will appeal to children, grandparents and those in between; and provide an enjoyable, meaningful experience for both those who attend annually and who might be giving the event a first try.

“I think there is something for everybody,” said Reyes, who is an assistant professor of music and director of choral activities.  “Even if you don’t like choral music or per se services, you’ll find something you like, and if you like what Vespers is you’ll find familiar elements that you’ll enjoy.”

This year, however, all four of the college’s arts programs and the Department of English are also involved.  Artwork by Hope students will be displayed during transitions within the service.  Dance students will perform a tap piece choreographed by Heather Cornell, assistant professor of dance instruction, to accompany a Chapel Choir performance.  The readings will include a selection by written by Susanne Davis, assistant professor of English, that will be presented by theatre students.

“I’m really excited that we can showcase all of the arts departments.  I love that it brought us together,” Reyes said.  “There’s been so much collaboration, and people’s ideas and artistry combined to shape it.”

Favorite hymns like “O Come All Ye Faithful” and “And the Child Grew” (from “The Nativity of St. Luke,” by Randall Thompson) are still on the program, although with some changes in presentation.  “O Come, O Come, Emmanuel,” for example, will be performed as a cello solo.  And while there won’t a congregation singing along, some of the pieces will include a sense of the effect via “virtual choirs” — alumni and community members who sang individually at home but were connected together via the internet to accompany the college’s choirs.

The program has been arranged to present a narrative arc that travels from darkness, to the anticipation of hope to come, to hope’s arrival.  It’s the timeless Advent message, which Reyes noted is additionally linked to the present through components like the theatrical reading, which reflects on current events such as the pandemic and the quest for justice.

“I wanted to have a program that speaks to larger reality and life and also the Advent season itself, with Christ being the hope,” Reyes said.  “I’m hoping the themes resonate with people and help us to embrace aspects of where we are — the darkness, the night, but also a sense of expectancy.”

The program’s debut on Saturday, Dec. 5, coincides with when the live event would have happened — the service typically takes place in early December, which is usually shortly before the conclusion of Hope’s fall semester. It was prerecorded this year not only to reduce gathering sizes but because the college in June adjusted its academic schedule so that the semester would end before Thanksgiving, also due to the pandemic.  Fall classes started on Aug. 17, instead of on Sept. 1 as originally scheduled, with final exams concluding on Nov. 24.

Christmas Vespers was first held on Sunday, Dec. 7, 1941. The timing, Pearl Harbor Day, was coincidental, with the program having been planned earlier in the semester.  The first service included performances by multiple ensembles, as well as an organ soloist and an organ and piano duet, and ended with the Chapel Choir singing the “Hallelujah Chorus” from Handel’s “Messiah.”

The service was first broadcast on WGVU in 1994, and is now filmed by WGVU Public Media every two or three years, most recently in 2019, appearing on WGVU and other public television stations across the state as well as elsewhere in the U.S.  WGVU has made the film of last year’s service available to PBS stations nationwide, and will show the 2019 program on the WGVU Life Channel on Thursday, Dec. 17, at 8 p.m.; and on WGVU’s HD Channel on Thursday, Dec. 24, at 11 p.m., and on Friday, Dec. 25, at 8 a.m., noon and 8 p.m.

The college has also developed an audio version of this year’s service for broadcast by radio stations that is available to the public on the college’s website at hope.edu/vespers.