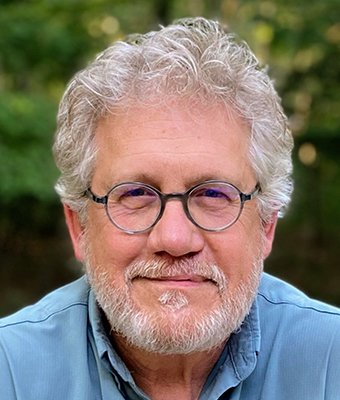 Like the geometric phenomenon that inspired its name, the new poetry book “Mobius Trip” by David James of the Hope College, writing as D.R. James, blends seemingly simple form with complex dimensionality.

A “Mobius strip” can be represented by rotating one end of a strip of paper 180 degrees and taping it to the other end, creating a circle with a literal twist.  The result is that if someone on the surface walked the entire length, they would return to their starting point after traveling on both sides without having crossed an edge.

As described by the publisher, Dos Madres Press Inc., “In ‘Mobius Trip,” poet D.R. James wheels readers through several rounds of the seasons, all the while interspersing wry commentary, philosophical reflection, natural observation, ekphrastic response and surreal landscapes. These poems are driven by as much sonic as imagistic impulse, and their strict 10-syllable, 10-line structure conjures sinuous syntax, sharp diction and surprise at every turn.”

“Mobius Trip” was published in October.  The collection includes works previously published in a variety of poetry journals as well as new pieces.

James’s prior poetry publications include the full-length collections “If god were gentle” (2017) and “Since Everything Is All I’ve Got” (2011), and the chapbooks “Flip Requiem” (2020), “Surreal Expulsion” (2019), “Split Level” (2017), “Why War” (2014), “Psychological Clock” (2007), “Lost Enough” (2007) and “A Little Instability without Birds” (2006).  In addition, his micro-chapbook “All Her Jazz” is printable-for-folding at the Origami Poems Project.  He has had poetry and prose in numerous publications, such as Caring Magazine, Coe Review, Diner, Dunes Review, Friends of William Stafford Newsletter, Galway Review (Ireland), HEArt Online, Hotel Amerika, North Dakota Quarterly, Passager, Rattle, The Sow’s Ear Poetry Review, Sycamore Review and Writer’s Digest, as well as in the anthologies “Poetry in Michigan/Michigan in Poetry” (2013) and “A Ritual to Read Together: Poems in Conversation with William Stafford” (2013).  James goes by D.R. rather than David to distinguish his work from that of another poet, David James, who writes from the east side of the state.

James is coordinator of academic coaching with Hope’s Academic Success Center and is an academic adviser through the First-Year Seminar program. For 33 years he was also an adjunct associate professor of English at the college, teaching writing and literature.  He has been a member of the faculty since 1987, and also taught full-time in the Department of English from 1982 to 1984.

James graduated from Hope in 1976 with majors in English and French.  He received an M.A. in literature and composition from the University of Iowa in 1980, and an M.F.A. in poetry from Pacific University in 2013.  He and his wife, Suzy Doyle, have six grown children and seven grandchildren.

“Mobius” is in paperback and retails for $18.  The book is available at the Hope College Bookstore on the lower level of the DeWitt Center, which is located at 141 E. 12th St., facing Columbia Avenue between 10th and 13th streets, and can be visited online at hope.edu/bookstore. The book is also available through the publisher or Amazon.