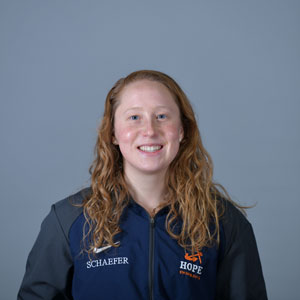 A breaststroke specialist, Schaefer won three individual events in record-setting time and swam on the winning 400-yard medley relay for the Flying Dutch at the 2021 MIAA Swimming and Diving Championships last weekend.

Schaefer, an exercise science major from DeWitt (St. Johns HS), set her first school record last Thursday in the 200-yard breaststroke in a dominating win with a time of 2:18.55. She broke the 21-year-old mark of 2:18.68 recorded by Betsy VandenBerg in 2000.

Two events later, she touched in with another win and record, this time in the 200-yard individual medley in which she is the two-time defending champ. Schaefer clocked a 2:04.92, besting her own previous record of 2:06.58 set in 2019.

Schaefer is the first Flying Dutch to repeat as the league's most valuable swimmer since Libby Westrate in 2013.

This is the fourth time in her career that she has claimed the MIAA's weekly honor.