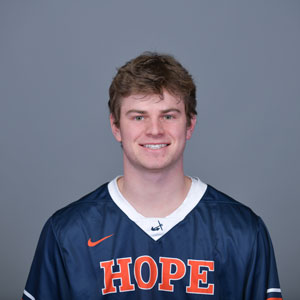 In the Flying Dutchmen's season-opening action last week, the junior electrical engineering major from Howell (Howell HS) scored a total of nine goals while recording a total of six assists.

Against Aurora College (Illinois) last Wednesday, a 15-5 Hope win at home, Radzville led the Flying Dutchmen in scoring with six goals. He also had two assists, four groundballs, and caused one turnover.

On Saturday at Calvin University, Radzville had a three-goal and four-assist game against the Knights in a 19-6 Flying Dutchmen victory. He also collected one groundball while causing one turnover.

This is the second time in Radzville's career that he has claimed the MIAA's weekly honor.