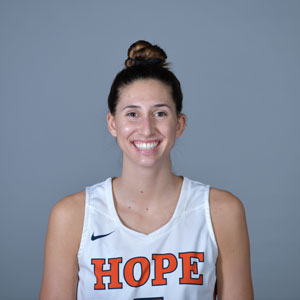 Hope College’s Olivia Voskuil has been chosen as the Michigan Intercollegiate Athletic Association Women’s Basketball Athlete of the Week for the third time in her career.

Voskuil averaged 9.3 points, a team-leading 6.3 rebounds, 2.7 steals and 2.3 blocks per game against No. 3 Trine University, Calvin University and Kalamazoo College.

In Saturday’s championship game against Trine, Voskuil matched his season-high five steals during a 64-54 victory that clinched back-to-back undefeated seasons for the Flying Dutch.

Hope set MIAA Tournament records with 26 points allowed to Calvin during the semifinals and 115 points scored against Kalamazoo in the first round.

This is the second time this season Voskuil has been named MIAA Women’s Basketball Athlete of the Week.