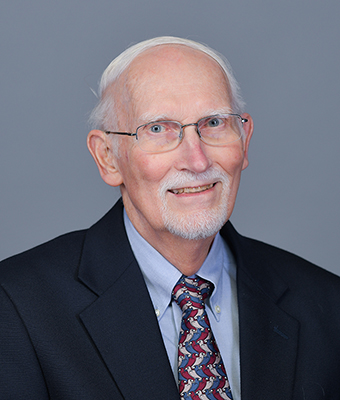 A specialist in statistics, he began teaching mathematics at Hope in 1965. During his tenure, he was department chairperson from 1971 to 1982, and from 1995 to 1997; a faculty representative to the Board of Trustees from 1975 to 1977; and interim dean for the natural sciences in 1993. Five times he enjoyed taking Hope College students to Japan for May Term at Meiji Gakuin University. In 1989, the college’s graduating senior class presented him the 25th annual Hope Outstanding Professor Educator (H.O.P.E.) Award.

He was born in Grand Rapids, Michigan, in 1934. He also lived in Waupun, Wisconsin; Kalamazoo, Michigan; and Pella, Iowa. After graduating from Pella High School, he attended Central College in Pella and graduated in 1956 with a major in mathematics.

He developed many ways to use technology in his teaching and scholarly activities, including applications in mathematics, art (especially in replicating M.C. Escher’s tessellations) and statistics.  He gave talks in England, Belgium, the Netherlands, Switzerland, Morocco, New Zealand, Singapore, Japan, Canada and the United States.

He served the Michigan Section of the Mathematical Association of America as chairperson (1976-77) and section governor (1989-92). The section awarded him a teaching award in 1992 and a distinguished service award in 1996.

He married Elaine Buteyn, who survives him, in 1959. Survivors also include their three children, Philip Tanis ’87 and Gretchen Schoon Tanis ’99, Joel Schoon-Tanis ’89 and Kathryn Schoon Tanis ’95, and Ellen Tanis ’90 Awad and Habeeb Awad; and grandchildren.

Arrangements are by Dykstra Funeral Home.  A visitation will take place on Wednesday, July 28, from 4 p.m. to 7 p.m. at Dykstra Mulder Chapel, located at 188 W. 32nd St.  A memorial service will be held on Thursday, July 29, at 1 p.m. at Third Reformed Church.

In lieu of flowers, contributions may be made to the Tanis Family Scholarship Fund at Hope College or the Mission Memorial Fund at Third Reformed Church, located at 111 W. 13th St.  For more information or to sign the online register book, please visit dykstrafuneralhome.com