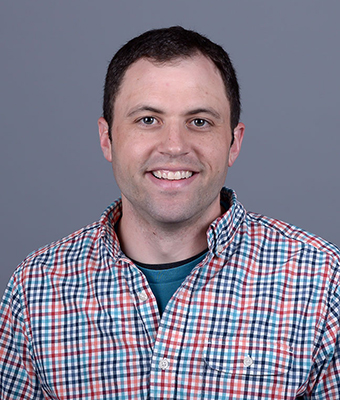 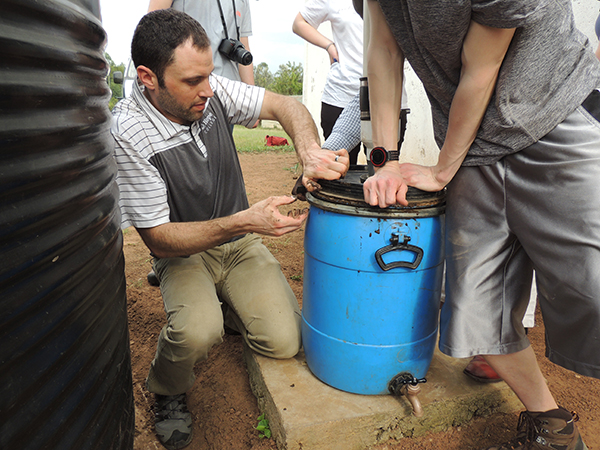 Adam Peckens, who is laboratory director of engineering at Hope College, has received the national 2022 Peter J. Bosscher Faculty Advisor Award for Outstanding Leadership from Engineers Without Borders-USA.

Engineers Without Borders USA (EWB-USA) partners with communities around the world to meet their basic human needs, and has almost 300 chapters across the United States.  The award, which was presented to Peckens on Saturday, Oct. 8, during the 2022 EWB-USA Conference, recognizes advisors who provide exceptional support and mentorship to their student chapter.

Peckens has been a mentor of the Hope chapter since joining the college’s staff in 2014 and became the chapter’s advisor in 2018. Throughout this time, he has led the group through two international projects.

“Adam has served as a chapter mentor/faculty advisor for eight years and throughout this time has ensured the continuity and health of our student chapter,” said Hope senior Carolyn Atkinson, who is president of the college’s chapter (EWB-Hope). “He emphasizes the importance of student leadership and fosters involvement and interest in the mission and vision of EWB year to year. Alongside raising a young family, Adam dedicates countless hours towards EWB and I am so glad that his commitment to EWB is being recognized.”

A bioelectrical-engineering major who has been involved in Hope’s chapter throughout her four years at the college, Atkinson noted that she values how participating in EWB-Hope has complemented her academic program and appreciates Peckens’ role as a mentor.

“EWB has had a tremendous impact on my personal and professional development. It has made me into a more confident leader and given me numerous project management and technical engineering skills,” she said.

“All of this could not have been possible without the leadership and guidance of Adam Peckens,” Atkinson said. “Alongside mentoring and guiding our chapter as a whole, Adam has taken the time to serve as an individual mentor to me as I filled the role of project lead within the chapter. He has given me the tools and skills necessary to see through leading a student/mentor travel team to Ecuador to oversee the construction of our project in July 2022 and all of the preparation that went into it.”

Consisting of approximately 20 students, Hope’s EWB-USA chapter most recently completed a 1.5-year project, designing and helping install a schoolyard enclosure in Teodomiro, Ecuador.  The chapter previously partnered with a community in southwest Kenya on a seven-year water supply project that involved designing and installing community water sources that consisted of three water wells and a rainwater catchment system.

The college’s chapter was established in the spring of 2005, and as its first project designed and implemented a water-purification system in Nkuv, Cameroon.  The relationship expanded to include the college’s departments of communication, education and nursing, and in 2008 the project was named one of four finalists for Michigan’s Carter Partnership Award.

As engineering lab director at Hope, Peckens assists faculty in the Department of Engineering by preparing materials for all labs, repairing and servicing equipment and instruments, and instructing introductory engineering laboratory courses.

Prior to coming to Hope, he worked for eight years as an environmental engineer on many different groundwater remediation projects around Michigan and the Midwest.  He developed, designed and installed remediation systems to treat contaminated groundwater, and was also a first responder to environmental emergencies like pipeline breaks and train derailments.

Peckens completed his Bachelor of Science degree in 2006 at Michigan Technological University in geological engineering.

EWB-USA’s national Peter J. Bosscher Faculty Advisor Award is named for the late Peter J. Bosscher, an EWB-USA faculty advisor at the University of Wisconsin Madison and a member of EWB-USA.  Award winners are EWB-USA volunteers who are current faculty advisors for an EWB-USA student chapter; actively engage with the chapter, demonstrating a commitment to continued learning; model and foster leadership among student chapter members; are project mentors for the student chapters, facilitating communication between the community, the government of the country in which they serve, and their university; support community-driven development; and demonstrate a passion to lead and educate the next generation of engineers.