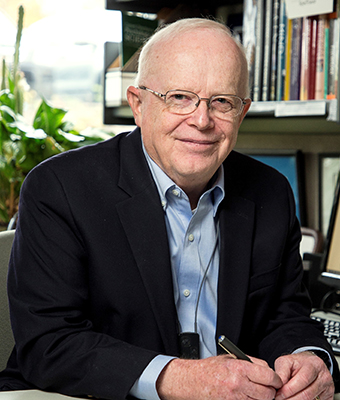 “How Do We Know Ourselves?” Explores the Wonders of the Human Mind

With a conversational approach and bite-sized chapters, “How Do We Know Ourselves?” by psychologist Dr. David Myers of the Hope College faculty makes it easy to find psychology’s answers to questions ranging from why we misinterpret song lyrics to why it can be so difficult to change someone else’s — or one’s own — opinion.

“The essays all aim to shine the light of psychological science on our sometimes bewildering and ever-fascinating lives,” Myers explains in his preface. “Each has a simple premise: although we all know a lot, we don’t know what we don’t know — even about ourselves.”

Subtitled “Curiosities and Marvels of the Human Mind” and geared toward a general audience, the book has been published by Farrar, Straus and Giroux, an imprint of Macmillan Publishers.  Its 40 essays appear in three clusters: “Who Am I?,” focusing on the self; “Who Are We?,” exploring relationships; and “What in the World?,” taking a psychological eye to the larger world.  Each running a quick four to six pages in length, they cover topics like “Making New Year’s Resolutions That Last,” “Judging Others and Judging Ourselves,” “The Psychology of Division,” “How to Make and Sustain Friendships,” “How Nature and Nurture Form Us,” and “The Power of Confirmation Bias and the Credibility of Belief.”

Reviewer Angela Duckworth, author of “Grit,” describes “How Do We Know Ourselves?” as a “treasure,” noting, “Each chapter is a gem of insight into the human experience, cut and polished to perfection. Better than any book I can recall, this book answers questions about why we think, feel and act as we do — but also makes us curious to learn more. I loved it!”

As far as those misheard song lyrics go, Myers explains the source of such confusion in the chapter “There Is More to Hearing Than Meets the Ears” as a mixture of inexperience and lack of context.  He adds that the phenomenon reveals a deeper lesson.

“We are automatic meaning makers,” he writes. “We perceive reality not exactly as it is, but as our brains interpret it.”

Inflexibility in opinion finds its roots and potential solutions in multiple chapters. As considered in “How We Polarize, and What We Can Do About It,” for example, the tendency of similar people to associate together creates a challenge, since — as shared from one study — “discussion among like-minded people tends to strengthen preexisting attitudes.” In contrast, “The Science of Humility,” reflects on the virtue of intellectual humility: “knowing that one might be wrong.”

Myers is a social psychologist who has been communicating psychological science to college students and the general public for more than 50 years. His articles have appeared in dozens of scientific periodicals and magazines, from Science to Scientific American. He is also the author of 17 books, including psychology’s most widely read textbook, which has sold more than eight million copies worldwide.  His several general-interest books include “The Pursuit of Happiness: Who Is Happy — and Why” and “Intuition: Its Powers and Perils,” both of which provide in-depth discussion of topics addressed by chapters in “How Do We Know Ourselves?”  Many of his scientific and general interest writings are available on his website, davidmyers.org, and in his TalkPsych.com blog.

“How Do We Know Ourselves? Curiosities and Marvels of the Human Mind” is in hardcover and totals more than 250 pages.  It retails for $26, and is available through Amazon as well as other booksellers.