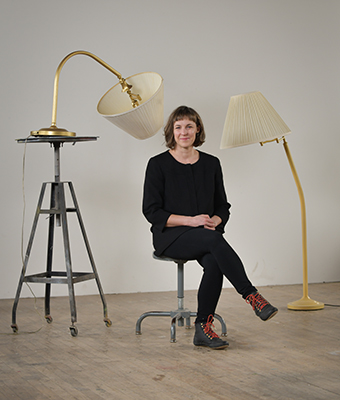 Lisa Walcott, assistant professor of art at Hope College, has been named the inaugural recipient of the college’s Billy Mayer Endowed Professorship in Sculpture or Ceramics.

The professorship was established by the late Dr. Richard and Margaret Kruizenga in honor and memory of Mayer, a longtime member of the art faculty who died in 2017.  Mayer joined the Hope faculty in 1978, and chaired the Department of Art and Art History from 1987 to 2004. He was the head of the college’s sculpture and ceramics program, and was active in the effort to build the Kruizenga Art Museum, which opened in 2015. His legacy is represented not only through his students and the museum, but around the Holland area by his large outdoor sculptures that are sited in Holland and Zeeland, and on the Hope campus. Walcott has been appointed to a three-year term with the professorship that will begin with the 2023-24 school year.

Margaret and Richard Kruizenga, who died, respectively, in 2013 and 2020, were 1952 Hope graduates, and had also contributed the lead gift for the Kruizenga Art Museum. Richard, who majored in economics and business at Hope and went on to a long career with Exxon Inc., credited his time as a student at the college for his longtime love for art, and admired and respected Mayer.

Walcott has been at Hope in the Department of Art and Art History since 2015, and is currently also the gallery director of the De Pree Art Center and Gallery.  She was initially a studio technician and visiting lecturer in sculpture and photography, and in 2018 became an assistant professor of art.  She has received multiple grants from the college in support of her art and collaborative faculty-student research.

Her art practice includes kinetic sculpture, installation, drawing and photography through which she grapples with and makes light of the perils of daily life. She has exhibited her work in solo and two-person or group exhibitions in a variety of venues locally and throughout Michigan, as well as in the states of Alabama, Illinois, Indiana, Kentucky, Minnesota, New York, Ohio, Pennsylvania, South Carolina, South Dakota and Tennessee, and in Puerto Rico.

Walcott has also been featured in a variety of reviews, interviews and publications, and an invited lecturer, visiting artist, juror and workshop leader at multiple colleges, universities and community arts organizations.  Among other events during the current calendar year, she made a presentation on teaching sculpture during February’s College Art Association Conference.  She is currently a member of the City of Holland’s Public Art Advisory Committee, and in 2019 was a juror for the Holland Energy Park.

Among other positions prior to coming to Hope, she was an art instructor with CultureWorks After School Program in Holland; an artist in residence with Brookside School, Cranbrook Educational Community, in Bloomfield Hills; a teaching assistant for Advanced Sculpture with the College for Creative Studies in Detroit; and an art instructor at Holland Christian High School. She also held an Artists’ Cooperative Residency & Exhibitions (ACRE) residency and scholarship; threewalls Artist Residency; and Ox-Bow Artist Residency.

Walcott graduated from Trinity Christian College in Palos Heights, Illinois in 2005, and received her MFA in sculpture from Cranbrook Academy of Art in 2010.