The community-wide NEA Big Read Lakeshore and Little Read Lakeshore organized by Hope College have received grants from both the nationwide NEA Big Read and the statewide Michigan Humanities in support of this coming fall’s programming, which will explore Greek mythology, the Hero’s Journey and untold hero stories through the lives of characters ranging from an ancient mythological enchantress-goddess to a modern-day child and well-known teen superheroes.

Running throughout the area for the ninth consecutive year, the Big Read Lakeshore will feature Madeline Miller’s “Circe.”  The Little Read Lakeshore for children will feature the picture book “Last Stop on Market Street,” by Matt de la Peña and illustrated by Christian Robinson.  For middle readers, the program will be featuring Homer’s “The Odyssey”; and the young-adult novels “Miles Morales: Spider-Man,” by Jason Reynolds; “Superman: Dawnbreaker,” by Matt de la Peña; and “Zita the Spacegirl,” by Ben Hatke.

“There’s already a lot of excitement around our book choices this year and our decision to explore Greek mythology and what it means to be a hero in different cultures and time periods,” said Dr. Deb Van Duinen, who is founding director of Hope College’s Big Read and associate professor of English education at Hope.  “I can’t wait for readers of all ages to dig into these topics and themes.”

NEA Big Read is an initiative of the National Endowment for the Arts in partnership with Arts Midwest that seeks to broaden understanding of world, community and self through the joy of sharing a good book.  NEA Big Read showcases a diverse range of contemporary titles that reflect many different voices and perspectives, aiming to inspire conversation and discovery.

Hope College’s NEA Big Read Lakeshore and Little Read Lakeshore bring the community together around a common book for a month each fall, using the shared experience of reading, discussing and exploring the themes of the book as a springboard to listen to and learn from each other.  Presented in collaboration with 50 community partners including lakeshore libraries, non-profits, businesses, school districts and academic institutions, the programs involve thousands of readers along the Lakeshore each year. 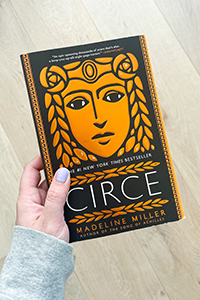 “Circe” offers new perspective on the Greek mythological goddess by telling her story in her voice.  As outlined by the NEA, while Circe in the Classic texts serves as a foil or obstacle for male protagonists and is portrayed as weak, or evil and lacking nuance, Madeline Miller reimagines her as complex, empathetic, and determined to evolve and find her own path.  “Circe” was #1 on the Best Seller list of The New York Times, which has described the book as a “bold and subversive retelling of the goddess’s story that manages to be both epic and intimate in its scope, recasting the most infamous female figure from the ‘Odyssey’ as a hero in her own right.” 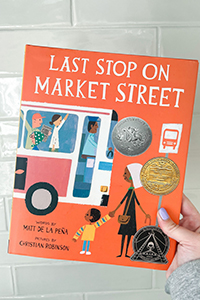 heroes,” with the Little Read exploring what it might look like for readers to be heroes in their own communities and daily lives.  The story follows a child, CJ, and his grandmother as they ride the bus across town from church to the soup kitchen where they volunteer.  As praised by BookPage, “It’s not often that you see class addressed in picture books in ways that are subtle and seamless, but ‘Last Stop on Market Street,’ the affectionate story of a young boy and his grandmother, does just that...  This ode to gratitude is 2015’s first must-read picture book.”  The book — which was adapted as a musical in 2018 — has also been a New York Times #1 Best Seller, with its numerous other honors including the 2016 Newbery Medal.

“The Odyssey” tells of the journey home by Odysseus following his participation in the Trojan War, and includes what is arguably the best-known depiction of Circe.  “Miles Morales: Spider-Man” follows the teen-aged Marvel character from Brooklyn as he wrestles with self-doubt stemming from his father’s and uncle’s criminal past, and contends with a teacher who lectures about the benefits of slavery historically and of the modern-day prison system. “Superman: Dawnbreaker” follows a teen-aged Clark Kent as the DC Comics future superhero teams up with his best friend, Lana Lang, to solve the disappearance of people from the Mexican American and undocumented worker community in Smallville, Kansas. “Zita the Spacegirl” is the first in a trilogy of graphic novels, and centers on the title character as she becomes an intergalactic hero determined to find her way home when she winds up on a planet inhabited by humanoid chickens and neurotic robots after being abducted by an evil cult.

More about the NEA Big Read Lakeshore and Little Read Lakeshore is available at bigreadlakeshore.com.  Details regarding the fall programs, which will include events featuring the authors, will be released in August.

The Big Read Lakeshore encourages book clubs interested in reading any of the chosen titles to sign up on the program’s website. Book discussion material and information on how to get involved are also available on the website, bigreadlakeshore.com.

Hope and the other participating organizations will match the NEA grant with additional financial and in-kind support, but committee members will also be contacting businesses and individuals in the area for sponsorships of book discussions and main events.

Since 2006, the National Endowment for the Arts has funded more than 1,600 NEA Big Read programs, providing more than $22 million to organizations nationwide. Over the past 13 years, grantees have leveraged more than $50 million in local funding to support their NEA Big Read programs. More than 5.7 million Americans have attended an NEA Big Read event, approximately 91,000 volunteers have participated at the local level, and 39,000 community organizations have partnered to make NEA Big Read activities possible. More information about the NEA Big Read, including book and author information, podcasts, and videos, is available at arts.gov/neabigread.

Established by Congress in 1965, the National Endowment for the Arts is the independent federal agency whose funding and support gives Americans the opportunity to participate in the arts, exercise their imaginations, and develop their creative capacities. Through partnerships with state arts agencies, local leaders, other federal agencies, and the philanthropic sector, the Arts Endowment supports arts learning, affirms and celebrates America’s rich and diverse cultural heritage, and extends its work to promote equal access to the arts in every community across America. More information is available at arts.gov.

As one of 56 state (and territories) humanities councils in the country, Michigan Humanities was founded in 1974 as a result of federal legislation. An affiliate of the National Endowment for the Humanities, Michigan Humanities also actively seeks grants, sponsorships and individual donations to further support cultural programming for Michigan communities. More information is available at michiganhumanities.org.

Created in 1965 as an independent federal agency, the National Endowment for the Humanities supports research and learning in history, literature, philosophy and other areas of the humanities by funding selected, peer-reviewed proposals from around the nation. More information is available at neh.gov.