Fifth-year seniors Sean Hoey and Evan Maday made the most of their final seasons on the baseball diamond for Hope College.

In addition to leading the Flying Dutchmen to an MIAA regular-season championship this spring, the dynamic duo have earned Most Valuable Player honors from the league’s coaches.

The accomplishments mark the 16th season the Flying Dutchmen have claimed MVP honors and the second time they swept both honors. In 2007, Mike Rodgers (pitcher) and Brian Baker (position player) were honored.

Hoey (Holland, Michigan / West Ottawa HS) went 5-0 with 3.77 ERA in seven starts against MIAA opponents this season. The right-hander and education major topped the league in both innings pitched with 43 and strikeouts with 51.

“He has worked tirelessly to put himself in a position to compete at a high level and be the ace of the staff,” Fritz said. “He has the opportunity to break the single season wins record this week. I could not be prouder of who Sean Hoey has become.”

The civil engineering major homered an MIAA-best seven times and tied for fourth with 27 RBIs during league play. 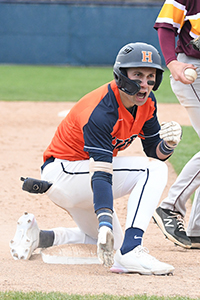 Evan Maday: Evan is one of the very best to ever wear the Hope uniform. He is a 5 tool guy that can do it all on the baseball field. His work ethic and leadership skills have helped develop our team culture, Evan is a first class young man.

Kym (Libertyville, Illinois / Libertyville) hit .500 during MIAA games this season. The business and economics major topped the Flying Dutchmen and the MIAA with 33 RBIs in league games.

The 21-game performance marked the 18th season the MIAA’s batting champion hailed from Hope and the sixth time a Hope hit .500 during league play.

“Brant loves the game of baseball as much as anyone I have ever been around,” Fritz said. “His work ethic and competitive drive are second-to-none. He has had an amazing senior season both between the lines and off the field. Brant also does a great job of mentoring our younger kids and making them feel valued.”

“Al has had a very solid freshman year. We thought during the recruiting process that Al could contribute right away, and he has exceeded expectations,” Fritz said. “He comes from a baseball family and has a very good understanding of the game. We are excited to watch him continue to grow throughout his career.