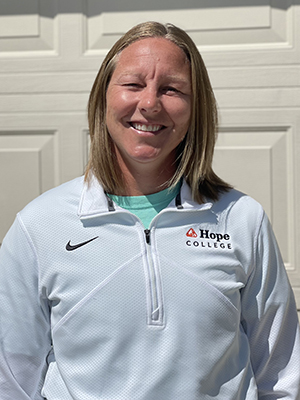 Brittney Harvey is excited to take her swing at building on the winning tradition of Hope College softball.

“Brittney is going to be an amazing addition to our coaching staff, softball program and Hope College,” Schoonveld said. “Her experience at one of the top programs in the country is going to enhance and build on the amazing things our softball program is providing. She is a winner, comes extremely highly regarded as a coach and has consistently impacted the lives of those she has coached. We want to welcome Brittney and her husband, Logan, to Hope and are excited to partner with them to transform lives.”

Last season, Hope finished with a 26-12 overall record and finished runner-up in the MIAA’s regular-season standings and the league tournament.

“I’m excited for the opportunity to join the Hope team,” Harvey said. “Hope has a long-standing tradition of excellence, and I plan to work hard to live up to it. To the young women of Hope softball I get to lead moving forward, I am beyond excited to start this adventure with you. Let’s have some fun and win a few games along the way.”

At Trine, Harvey most recently worked as the Senior Woman Administrator, as an assistant softball coach for the Thunder, and as an advisor to the Student-Athlete Advisory Committee.

“I’ve had the privilege to work at Trine for a number of years and be a part of an amazing staff and coach some incredible young women, each of which has given me the courage to take this step forward in my career,” Harvey said. “I can’t thank them enough for everything they’ve taught me and the love they’ve shown me.”

Harvey graduated from Tri-State University (now Trine) in 2010 with a degree in civil engineering and spent time after graduation working in the industry.

As a student-athlete, Harvey starred at both Tri-State and Muscatine Community College in Muscatine, Iowa. Harvey was a part of two MIAA Championship teams as a player and helped coach the Thunder to four MIAA titles.

At the time of her graduation from Tri-State, Harvey ranked as the school's all-time leader in slugging percentage and second in career batting average.

In 2007, Harvey claimed All-MIAA First Team honors as a first baseman. She also set single-season team records for batting average and doubles during the 2007 season.