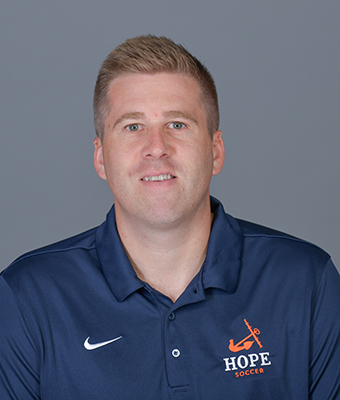 Blahnik guided Olivet Nazarene to a .707 winning percentage over six seasons from 2012 through 2017. Blahnik served as an assistant men’s soccer coach at Hope in 2019, helping the Flying Dutchmen return to the NCAA Division III Tournament and finishing with a 14-6-1 overall record.

“We are excited to welcome Dave Blahnik to Hope College as the leader of our men’s soccer program,” Director of Athletics Tim Schoonveld said. “He has a proven record of success both on and off the field and is an outstanding leader of men. We are confident that he will do a fantastic job meeting our mission and leading a program that competes with excellence while helping to transform the lives of its student athletes. We want to welcome Dave, Karlynn, Brek and Koen to the Hope family.”

Blahnik said he is excited to lead a great men’s soccer program at Hope.

“The future is very bright for Hope men’s soccer, and I am committed to continue working towards winning championships on and off the field,” Blahnik said. “I want to thank Tim Schoonveld and Lindsey Engelsman for the opportunity. Holland and the Hope College community are a place my family and I are proud to be part of and call home.”

Last season, Hope finished with a 11-4-3 overall record and advanced to the semifinals of the MIAA Tournament under head coach David Brandt. The Flying Dutchmen were MIAA Tournament champions during the 2021 spring season.

“It is important that current and future Hope men’s soccer players have a strong desire to succeed in the classroom, their personal life and on the field,” Blahnik said. “My goal is to help provide the best college experience possible for our student-athletes and Hope College provides every opportunity for that.”

Since 2019, Blahnik has worked as Director of Sales and Business Development for Diehard Custom, a global manufacturer, distributor and supplier of custom-made promotional products and apparel for professional sports teams, schools, leagues and businesses.

Blahnik holds a bachelor’s degree in sport management and a Master of Business Administration degree from Olivet Nazarene. As a student-athlete, Blahnik earned CCAC All-Conference honors and was team captain during the 2004 and 2005 seasons.