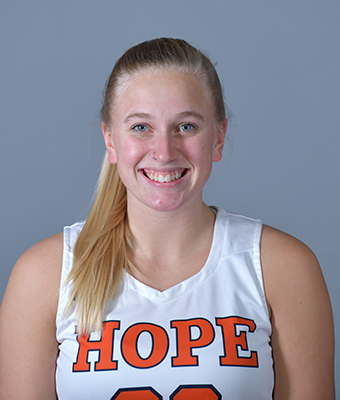 For the second consecutive year, the women’s basketball standout is the MIAA’s Sheila Wallace Kovalchik Scholar Athlete of the Year - Women’s Sport.

Since 2003, the Sheila Wallace Kovalchik Scholar Athlete of the Year award has recognized graduating female seniors who have excelled in academics and athletics, as well as displayed outstanding leadership in their respective communities. The award honors former MIAA Commissioner Sheila Wallace Kovalchik, who served the conference from 1991 to 2002.

“Kenedy’s impact on the court, in the classroom, on our campus, and in the greater community have been extraordinary,” said Lindsey Engelsman, Hope College’s Associate Athletic Director. “She is the epitome of a selfless leader who leads by example and strives for excellence in all that she does. We are excited to watch the transformational impact she will continue to have on those around her as she continues her post-graduate education and eventually begins a career in social work.”

In May, Schoonveld (Zeeland, Michigan / Holland Christian HS) graduated from Hope after majoring in social work and minoring in psychology.

Schoonveld returned for a fifth basketball season during the 2021-22 school year thanks to the NCAA’s COVID waiver and helped the Flying Dutch claim their third Division III national championship in March. She was a co-captain on the women’s basketball team for three seasons.

In the classroom, Schoonveld was voted as a College Sports Information Directors of America Academic All-American in 2021 and made the MIAA Academic Honor Roll in each of the school years she competed.

Schoonveld also was awarded a $10,000 NCAA Postgraduate Scholarship that she will use toward her enrollment this summer in Baylor University’s Master of Social Work program.

On the court, Schoonveld was named as the Women’s Basketball Coaches Association D3hoops.com Division III Player of the Year in 2022. Schoonveld also was chosen as the women’s basketball finalist for the DIII Honda Athlete of the Year Award.

Schoonveld earned MIAA Most Valuable Player honors for the third time this season and All-MIAA First Team distinction for a fifth time.

“I came to Hope knowing that I wanted to pursue social work, and that I had big goals as far as the basketball court was concerned,” Schoonveld said. “Being a student at a Division III school allowed me to be successful in both teams. I am forever grateful for Hope College, the MIAA, and NCAA Division III for allowing me every opportunity that I have had during my college experience.”