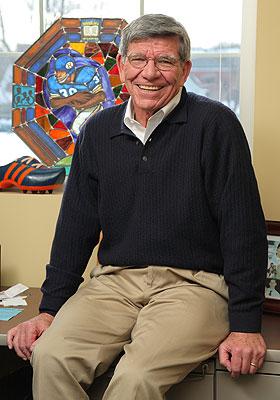 It is a rare occurrence where an individual sticks with a job for most of his life and still enjoys every day he comes to work.  It is even more rare to find a man who upholds morality, honesty and faith in all that he does.  For the past 39 years, Hope College has been blessed with the presence of just such a man. Ray Smith, director of athletics for men, will retire in June.  His departure will mark what many would label the end of an era, one of success, and not just in the win column.

Mark Northuis, chair of the department of kinesiology, said that although Smith has had an incredible coaching and administrative career in the record books, it is his Christian faith that truly marks his successes.

"For him, his faith is more important than any win/loss record," Northuis said.  "He desires to change people through faith."

This faith has changed people, just ask Pete Semeyn, pastor at Faith Reformed Church in Traverse City.  Semeyn was on the football team when Smith first started as head coach in 1970; he graduated and went into teaching, but it just didn't feel right.  He felt called to ministry, but before he made the life-changing decision, he decided to ask important people in his life what they thought.  He turned to coach Ray Smith.

"He knew me better than anyone; he'd seen the good, the bad, and really ugly side of me," Semeyn said in a sermon delivered at The Gathering on Jan.25.  "We (Semeyn and his wife) told him that we were considering ministry...(Smith and his wife, with tears in their eyes, responded by saying) 'We've been praying for you for two years, that God would call you into ministry.'"

If his faith and commitment to people wasn't enough, his performance and success speak volumes.

Smith took over the realm as Hope's head football coach when the team hadn't won the MIAA in seven years.  He went on to become the winningest football coach in MIAA history, as well as being named the Division III coach of the year in 1984.  On top of football, Smith has also coached wrestling, golf and baseball at Hope.

His success as a coach can also be attributed to his character and faith.  Smith was able to bring in high quality student athletes through his personal approach to recruiting.

"Ray was the first coach in the league that really recruited," Northius said.  "He combined his knowledge of playing with his strong character to bring in high quality student athletes."

Smith added the role of director of athletics for men in 1980; during his 29-year tenure as athletic director, Hope has won the MIAA Commissioners' Cup 23 times (and number 24 is probably right around the corner).

Smith will be able to reflect with fondness at all he has accomplished when he moves on to retirement in June.

"There are so many pleasant memories," Smith said.  "When I look back on my years I will definitely have a smile on my face.  The Lord had a plan for me and my family to come to Hope, and I am certainly a better person for coming here."

Smith most likely won't be thinking about how many wins his football team had, or the number of times Hope beat Calvin; he will remember the people he has changed and those that changed him.

"My experience here has been buoyed by meeting strong Christians," Smith said.  "There have been so many intelligent people that I have worked with and coached that had a love for both sports and Christ."

"It is nice to leave your job with no regrets," Smith said.

No regrets, now there's something to strive for.