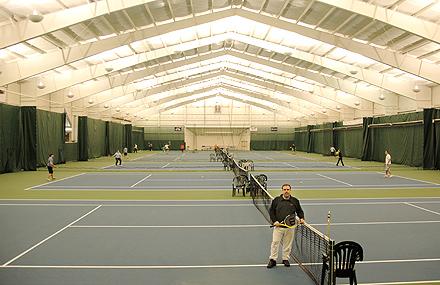 Jorge Capestany, manager of the DeWitt Tennis Center at Hope College, has been named the Professional Tennis Registry (PTR) Member of the Year by “Racquet Sports Industry” magazine.

“Racquet Sports Industry” has honored Capestany as one of its 2011 “Champions of Tennis.” The annual awards recognize people, businesses and organizations that are making a difference in the tennis industry, and include profile stories in the magazine’s January issue.

Of Capestany, the publication notes, “When it comes to teaching tennis and educating fellow coaches, few people have done as much as Jorge Capestany.” Also in the article, PTR’s chief executive officer, Dan Santorum, describes Capestany as “a wonderful ambassador for our sport.”

Capestany will receive the award during the PTR’s International Tennis Symposium, taking place in Orlando, Fla., on Friday-Monday, Feb. 24-27. Also at the symposium, which will include attendees from more than 50 countries, Capestany will be a featured speaker during multiple sessions.

Manager of the six-court DeWitt Tennis Center since the fall of 2003, Capestany is a 30-year veteran of the tennis industry. He is one of only 10 people world-wide that is a Master Professional with both PTR and the United States Professional Tennis Association Inc. (USPTA). The Midwest Division of the USPTA has honored him multiple times through the years, including twice as “Midwest Professional of the Year,” twice as “Facility Manager of the Year” and with its “Outstanding Education of the Year” award. He has also been named the “Michigan Pro of the Year” six times by either USPTA or PTR.

He has been published in several industry publications and has been a frequent speaker at professional conferences, and among other activities serves as a master trainer on the TIA’s Cardio Tennis speakers’ team and as a USTA Recreational Coaches Workshop national trainer. He is also the founder of www.tennisdrills.tv, a video-based site with more than 800 tennis drills and tips that has more than 700 subscribers from around the world.

Capestany has coached hundreds of ranked juniors, including three national champions. In his career, his programs have developed more than 180 high school state champions in Michigan.

An international publication, “Racquet Sports Industry” magazine reaches more than 18,000 clubs, schools, municipalities, stores and other sites and individuals involved in the racquet sports industry. The January issue in which Capestany is profiled is available online at www.racquetsportsindustry.com/issues/index.html.

Founded in 1976, PTR has approximately 14,000 members in 117 countries; the registry’s mission is to educate, certify and serve tennis teachers and coaches around the world in order to grow the game.