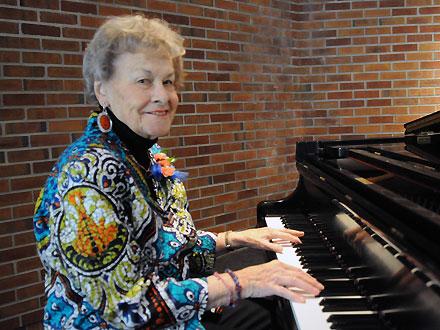 The award recognizes a person's contributions to Hope and its alumni through notable personal service and long-time involvement with the college. She will receive the honor during the Winter Happening luncheon, which will begin at 12:30 p.m. at the Haworth Inn and Conference Center.

Barbara Dee has been active in the life of the college in a variety of ways since enrolling as a freshman from New York - where her father was a Reformed Church minister--in 1939.

She has performed as a pianist at numerous events at Hope as well as throughout the community through the years. As a student, she was an accompanist during the college's first Christmas Vespers service, held - coincidentally--on Pearl Harbor Day, Sunday, Dec. 7, 1941. In another first at the college, she accompanied the debut production of Hope Summer Repertory Theatre (HSRT), "Forty-Five Minutes from Broadway," in 1972.

She majored in English at Hope with additional concentrations in education, music and French. She was a member of the Sigma Sigma Sorority as a student, serving as president, and was also president of the French Club, and received the all-campus Southland Medal as a graduating senior.

She did graduate studies at the Sorbonne in Paris and at the University of Maryland. Her professional experience includes having been a substitute teacher at the high school level in Bangor, Maine; teaching kindergarten in Munich, Germany; teaching English in a French Lycée outside of Paris, France; French in Prince George's County, Md.; and piano lessons for several years in Holland.

She is a member of Hope Church in Holland, where she participated in the music program for many years. Her extensive community involvement and service has also included the Woman's Literary Club, the Century Club, the Evergreen Commons Senior Center (where she accompanied Tulip Time shows for several years) and volunteering at Warm Friend Resthaven.

Her husband, J. Norman Timmer, was a 1938 Hope graduate. They were married for 59 years, from 1944 until his death in 2003. He was a veteran of World War II whose career included serving as a teacher and school superintendent and many years as an officer in the United States Air Force, from which he retired as a colonel in 1968. He subsequently served as a member of the Hope staff from 1970 until 1976, including as director of alumni and community relations and as director of annual funds.

They had three children: Barbara, a 1969 Hope graduate; John, who graduated from the United States Air Force Academy; and Paul, a 1976 Hope graduate. Paul, who died in 1995, is remembered on campus through the Paul Norman Timmer Memorial Awards presented during the college's annual spring Honors Convocation to students interested in foreign service or international studies, and the Paul Norman Timmer '76 Scholarship Fund.

The college's Timmer Cottage on East 13th Street, a residence for up to nine students, is named for Timmer and her husband. They had lived in the home from 1973 to 1998.

In addition to her volunteer service as an accompanist, her engagement with Hope has included extensive involvement in college alumni and cultural events. While her husband was stationed at the Pentagon, she participated in the Washington-area alumni group and helped recruit students. She has also been active with the Sigma Sigma alumnae association and is a member of the college's Second Century Club and the Hope Academy of Senior Professionals. She has been connected to HSRT for many years beyond her role with the premiere production, with her involvement in the program including serving as first president and as a continuing member of the HSRT Theatre Guild, and acting in the HSRT productions of "Music Man" and "To Kill a Mockingbird." She and Norman received Distinguished Alumni Awards from Hope in 1980.

Admission to the January 28 Winter Happening luncheon is $12, and reservations are required. Additional information about the luncheon and the rest of the Winter Happening activities, which include multiple free seminars presented in the morning by Hope faculty and students, may be obtained by calling the college's office of public and community relations at (616) 395-7860 or online at www.hope.edu/pr/12WinterHappening.html