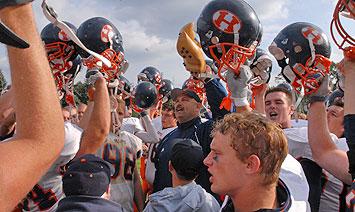 One of the longest small college rivalry football games unfolds for the 92nd time Saturday (Oct. 20) when the Flying Dutchmen travel to Kalamazoo to renew the "Wooden Shoes Rivalry" Kickoff for Kalamazoo's Homecoming game will be 2 p.m.

One of the longest small college rivalry football games unfolds for the 92nd time Saturday (Oct. 20) when the Flying Dutchmen travel to Kalamazoo to renew the "Wooden Shoes Rivalry" Kickoff for Kalamazoo's Homecoming game will be 2 p.m.

The Flying Dutchmen will renew their oldest MIAA football rivalry. It started in 1910 and has been known as the Wooden Shoes Rivalry game since 1931. Hope owns a 52-33-6 advantage in the all-time series, including a 22-16 victory in 2011. Kazoo last defeated Hope in 1995, coach Kreps’ first season at the helm of the Flying Dutchmen. This will be Kalamazoo’s Homecoming game.

The traveling trophy, a pair of hand-carved Dutch wooden shoes, has been part of the rivalry for 81 years. For years the wooden shoes were viewed as unique among intercollegiate trophy games because when a tie occurred the head coach of each team could have one of the pair until the next year's game. That happened six times until the NCAA eliminated the tie game in 1996. The teams will be playing for the 92nd time.

Both Hope and Kalamazoo are playing in renovated stadiums featuring artificial turf, the Flying Dutchmen at Holland Municipal Stadium and Kalamazoo at its Angell Field. Every MIAA football program now has an artificial turf playing surface. Kalamazoo’s project is part of a $16 million upgrade to its outdoor athletics facilities. The stadium will be dedicated prior to kickoff.

Kalamazoo opened its season with three consecutive victories, but has now lost three in-a-row including twice against MIAA opponents. Hope lost four of its first five games, but has won the last two to improve to 2-1 in the MIAA.

Stat Watch: The teams have nearly identical total offense numbers, the Flying Dutchmen averaging 363.6 yards per game as opposed to Kalamazoo’s 362.2 ….. The Flying Dutchmen have recovered 10 opponent fumbles and hold a 19-14 takeaway/turnover advantage ….. Hope punter Dean DeVries leads the MIAA with a 39.0 yards per punt average  .…. Junior linebacker Tim Klaus is averaging 10.7 tackles per game, best in the MIAA.