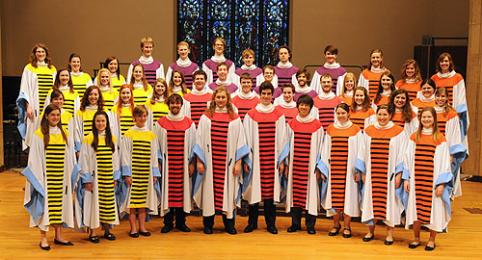 The Hope College Chapel Choir, under the direction of Dr. Brad Richmond, has announced its 2013 spring tour with concerts planned between March 10-20 in Michigan, Ohio, New Jersey and New York before concluding with the traditional home concert in Holland on Monday, March 25.

The Hope Chapel Choir, founded in 1938, is Hope College ’s premier choral ensemble.  Made up of forty auditioned singers, Chapel Choir has toured extensively throughout the United States and Canada, and has traveled abroad on eight occasions.  The choir is featured along with other music ensembles in Christmas Vespers, a tradition that stretches back to 1941.  Award winning broadcasts of Christmas Vespers by WGVU, Grand Rapids, MI, are shown on PBS stations around the country at Christmastime.

In May of 2009, the choir toured South Africa, singing in a variety of contexts including large urban churches, universities, small parishes in black townships, inner city missions, and AIDS clinics.  The students who participated in this trip were moved deeply by their experiences and voted overwhelmingly in favor of making central to the choir’s mission an ongoing relationship with South Africa.

The members of this year’s choir come from a cross-section of academic disciplines.  While many are music majors, others specialize in biology, business administration, computer science, religion, theatre, chemistry, English literature, and mathematics.  Regardless of discipline, each member is highly dedicated to carrying on the fine tradition of choral artistry that has been the Chapel Choir’s for many years.

Brad Richmond has been Director of Choral Activities at Hope College since 1998. He teaches conducting and voice, and also directs the Chapel Choir and College Chorus.

Prior to this, he served as Director of Choirs at Southeastern Louisiana University. His presentation of Bach’s B Minor Mass won the Gambit Classical Arts award for the best choral performance of 1998 in New Orleans and the surrounding region.  During summers from 1995 to 2000 he served as a high school choral director at Interlochen Center for the Arts.

THE DISTINCTIVE ROBES WORN BY THE HOPE COLLEGE CHAPEL CHOIR

The Chapel Choir robes were designed fifty years ago by Charles and Ray Eames, a husband-and-wife team among the most influential designers of the twentieth century.  Filmmakers, poets, painters and furniture designers, the couple was hired in the 1940s as consultants by the Herman Miller Company, which had been impressed by a widely acclaimed furniture-design exhibition at the New York Museum of Modern Art featuring the work of Charles Eames.  In 1952, when the Herman Miller Company started a mixed chorus, Ray Eames offered to design robes for the choir.  It is not known whether the robes were produced in California, where Charles and Ray kept an office, or in Holland, where some believe they were sewn by local seamstresses.  In 1960, the Herman Miller Mixed Chorus disbanded and the robes were given to Hope College, where they became the performing apparel of the Chapel Choir.

The robe colors are intended to symbolize the four primary voice parts, from highest and brightest (yellow) to lowest and darkest (purple).  The black horizontal lines represent an extended grand staff, and the other black swatches stand for random notes in the universe.  Purity of tone and faith are represented by the prevailing white that appears on every surplice.  No one would ever describe these robes as subtle; they are very much in line with the bold and quirky designs of mid-century modernism.  But, as the work of Charles and Ray Eames, they hold a special place in twentieth century art and design, and would be at home in art galleries everywhere.